A Taiwanese woman, named He, complained about having a swollen eye only for doctors to later find bees in it. 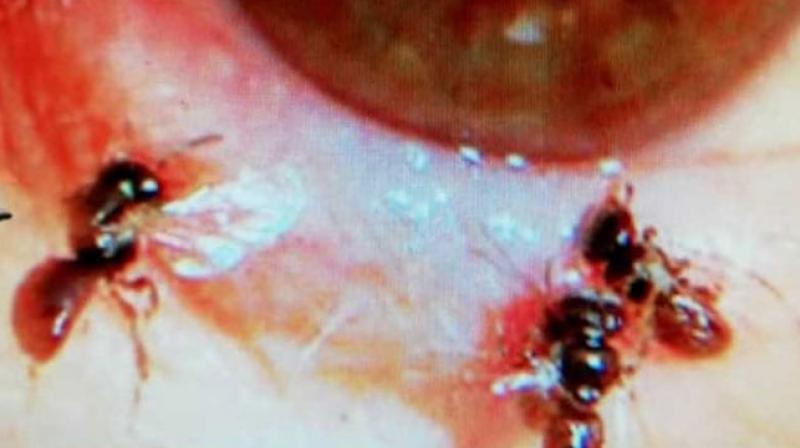 This incident has been termed as ‘world’s first’. (Photo: Youtube Screen Grab)

Taiwan: People may find this hard to believe and it may sound hypothetical, but this incident has actually happened in real life. A Taiwanese woman, named He, complained about having a swollen eye. She went to Fooyin University Hospital, and doctors there revealed to her that she has four living bees inside her eye feeding on her tears. The doctors, however, managed to remove all four bees from her eye socket.

Hospital’s head of ophthalmology Dr Hung Chi-ting said that he saw something strange in her eye at first and after carefully examining further under a microscope, he noticed that they were insects. He managed to pull them out one by one without damaging their bodies, reported The Guardian.

Based on a video of Ms He and the hospital’s press conference shared by Apple News Network, the bees entered her eye while she was plucking out weeds from a nearby graveyard. She felt something go in her eye, but shrugged it off thinking it must be dirt. This incident has been termed as ‘world’s first’.

The next day, however, she found her eye swollen and went to the hospital.

Doctors say Ms He recovered her 80 per cent eyesight only because of the fact that she didn’t rub them much.

The small bees, known as ‘Halictidae’, are attracted to human perspiration. They are commonly found near graves and in mountains.