Purnama, Jakarta’s first non-Muslim governor for half a century and its first ethnic Chinese leader. 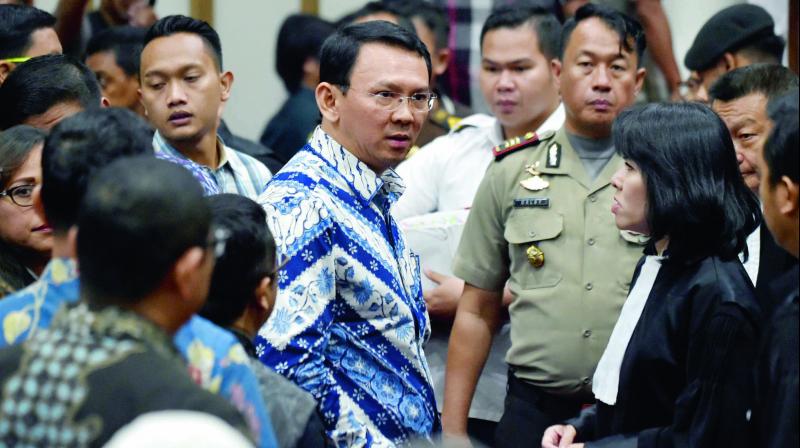 Jakarta’s Christian governor Basuki Ahok Tjahaja Purnama (centre) talks to his lawyers after his sentencing at a court in Jakarta. (Photo: AP)

Jakarta: Jakarta’s Christian governor was jailed for two years on Tuesday after being found guilty of blasphemy, in a shock decision stoking concerns over rising religious intolerance in the most populous Muslim-majority nation.

Islamic hardliners outside the court shouted “God is greatest!” as news came that Basuki Tjahaja Purnama would be sent to prison for insulting Islam, a very harsh punishment after prosecutors recommended only probation.

Mr Purnama, Jakarta’s first non-Muslim governor for half a century and its first ethnic Chinese leader, looked calm when the verdict was announced and said he would appeal.

He was immediately transferred to jail and authorities said his deputy would take over running Jakarta for the final few months of his term. Hundreds of his supporters descended on the prison shouting “Free Ahok”.

Ahok was hauled into court last year to face trial on charges of insulting the Koran while campaigning for re-election, after the blasphemy accusations sparked a series of protests spearheaded by radical groups and encouraged by rivals.