World   Asia  10 Jun 2019  Iran gears up for high-stakes diplomacy amid tension with US
World, Asia

Iran gears up for high-stakes diplomacy amid tension with US

It also comes as Japan tries to negotiate its own trade deals with Trump, who has been quick to impose tariffs on other nations. 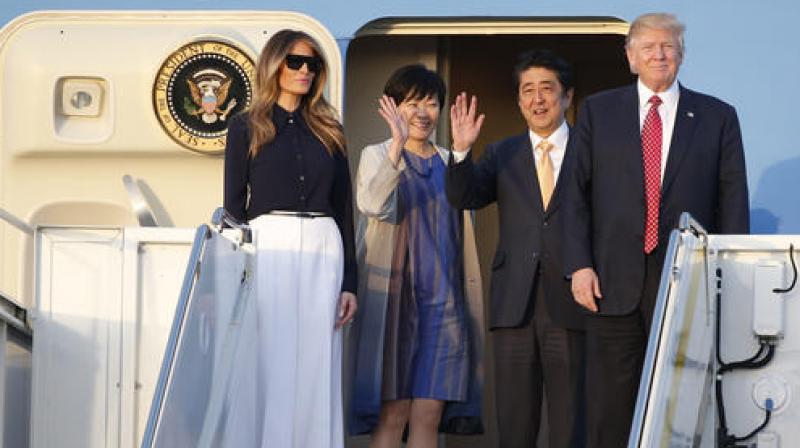 Shinzo Abe will arrive on Wednesday in Iran after earlier meeting with President Donald Trump, whose maximalist approach toward the Islamic Republic has seen America re-impose sanctions once lifted by the 2015 accord and create far-reaching newer ones. (Photo: File)

Abu Dhabi: As its nuclear deal with world powers unravels amid heightened tensions with the US, Iran will see a week of high-stakes diplomacy capped by the first visit of a Japanese prime minister to Tehran since the 1979 Islamic Revolution.

Shinzo Abe will arrive on Wednesday in Iran after earlier meeting with President Donald Trump, whose maximalist approach toward the Islamic Republic has seen America re-impose sanctions once lifted by the 2015 accord and create far-reaching newer ones.

German Foreign Minister Heiko Maas also will visit Tehran as well this week. What Abe will be able to accomplish remains unclear, as Iran already has warned Europe it will begin enrichment of uranium closer to weapons-grade levels by July 7 if it doesn't come up with new terms to the deal.

It also comes as Japan tries to negotiate its own trade deals with Trump, who has been quick to impose tariffs on other nations. But Abe, whose nation relies heavily on Mideast crude oil to power its economy, already has acknowledged the challenge.

"Between Japan and the United States, there should be close collaboration so that this tension surrounding Iran should be mitigated and alleviated, and it shouldn't culminate in armed conflict," Abe said in a May news conference with Trump in Tokyo.

The current crisis, which has seen the US hurry an aircraft carrier strike group and B-52 bombers in the region, takes root in Trump's decision last year to withdraw the US from the nuclear deal. That accord saw Iran agree to limit its enrichment of uranium in exchange for the lifting of economic sanctions Trump, in withdrawing from the deal, pointed to the accord not limiting Iran's ballistic missile program, nor addressing what American officials describe as Tehran's malign influence across the wider Mideast.

Those who struck the deal at the time described it as a building block toward further negotiations with Iran, whose Islamic government has had a tense relationship with America since the 1979 takeover of the US Embassy in Tehran and subsequent hostage crisis. Some members of Trump's administration, particularly National Security Adviser John Bolton, previously supported the overthrow of Iran's government.

Trump, however, has stressed that he wants to talk with Iran's clerical rulers. "I'm not looking to hurt Iran at all. I'm looking to have Iran say, 'No nuclear weapons,'" Trump said at the same Tokyo news conference. "We have enough problems in this world right now with nuclear weapons. No nuclear weapons for Iran. And I think we'll make a deal."

The reaction has been mixed in Iran. Its rial currency is currently trading at 128,000 to USD 1. It had been 32,000 to the dollar at the time of the 2015 deal. Japan had once purchased Iranian oil, but it has now stopped over American sanctions.

However, Mideast oil remains crucial to Japan and recent threats from Iran to close off the Strait of Hormuz, the narrow mouth through which a third of all oil traded by sea passes, has raised concerns. Abe will arrive Wednesday to Tehran and will stay through Friday, Iran's state-run IRNA news agency reported on Sunday.

Zarif, speaking at a high school in Tehran on Sunday, welcomed Abe's visit, but stressed Trump had engaged in an "economic war" against Iran through the imposition of sanctions. "We have said it clearly that economic war is not different from a (military) war at all. Mr. Trump has announced that he is pursuing an economic war," Zarif said.

An "economic war targets ordinary people and is in fact terrorism. This policy must stop." Meanwhile, Iran on Sunday announced what it described as a new surface-to-air missile battery it called the Khordad 15.

The system uses locally made missiles that resemble the HAWK missiles that the U.S. once sold to the shah and later delivered to the Islamic Republic in the 1980s Iran-Contra scandal. The revealing of the missiles comes as the USS Abraham Lincoln, the aircraft carrier ordered to the region, remains in the Arabian Sea.

It has yet to transit the Strait of Hormuz to reach the Persian Gulf, likely to both protect a vessel already within range of airstrikes on Iran and not to provoke a response from Iran's paramilitary Revolutionary Guard, which routinely harasses American naval ships.

Ahead of Abe, German Foreign Minister Heiko Maas will visit Tehran on Monday. Germany is one of the signatories to the nuclear deal and has sought to keep Iran in the accord. Maas visited both Jordan and the United Arab Emirates on Sunday.

Speaking in Abu Dhabi, the Emirati capital, Maas said it was important to stop any military confrontation in the Gulf. "We want to avoid any misunderstandings that would lead to automatic reactions that could lead to violence," Maas said.

"All those involved bear responsibility to absolutely avoid a spiral of escalation and this is a view I will also express very clearly tomorrow, on the opposite shores of the Gulf." He also stressed that Germany would not accept "less-for-less" in any negotiations over saving Iran's nuclear deal.

However, his Emirati counterpart, Sheikh Abdullah bin Zayed Al Nahyan, said any new nuclear deal needed to include concerns like Iran's ballistic missile program and regional influence. "Any attempt to make this agreement successful, we think, needs all countries of the region to be a part of it," Sheikh Abdullah said.

Maas quickly left after the news conference, not pausing to shake hands with Sheikh Abdullah and passing in front of him on his way out.