The festival surrounds an old tradition of publicly displaying a jewel-studded vest 'Bhoto' on the last day of the Jatra. 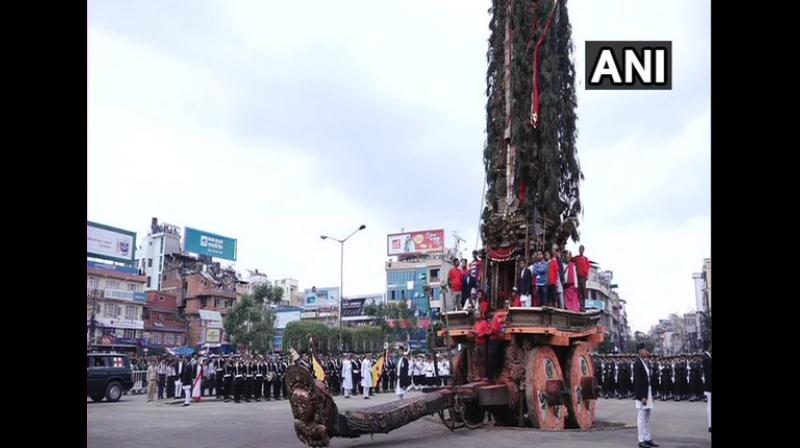 Kathmandu: The 'Rato Machhindranath' chariot festival concluded in Nepal's Lalitpur district on Sunday after observing 'Bhoto Jatra' or the 'vest festival' that marks the end of the month-long celebration.

The festival surrounds the old tradition of publicly displaying a jewel-studded vest 'Bhoto' on the last day of the Jatra.

Indra Bajracharya, a resident of Patan in Kathmandu Valley told ANI that a Jyapu (Newar farmer) lost the vest which he had received as a gift from the serpent god Karkotaka Naga for doing him a favour.

One day, the farmer had come to Jawalakhel to watch the chariot pulling festival where he saw someone wearing his missing garment.

A brawl broke out over the vest, and as neither party could prove ownership, the vest since then has been shown to the public annually as a call to potential claimants to step forward.

The jewel-studded vest is packed and kept inside the cloth pouch for a year and opened only in the presence of the Head of State on a particular day fixed by the priests when the 'Rato Machhindranath Jatra' commences.

Besides, there also exists another myth about the commencement of the festival in the mountainous country.

According to Hindu culture, there is a myth that Yogi Gorakhnath, the founder of 'Nath Hindu', came to seek alms in Patan which the people in the region did not provide him.

Hence, he became very furious and captured all the rain and transforming them into serpents. There was no rain in Patan for ages.

To solve problems, astrologers and Pandits advised the King to invite Machhedranath.

Machhedranath is believed to be the teacher of yogi Gorakhnath; knowing that his teacher was in town, he went to meet him freeing all the serpents which resulted in plenty of rainfall.

Therefore, this festival is also celebrated as a symbol of rain and fertility.

This festival is celebrated by pulling the wooden wheeled chariot along the various parts of the city.

A 60-feet tall spire fabricated from bamboo poles raised from its all four ends is carried by the chariot.

The occasion was graced by the presence of President Bidhya Devi Bhandari along with other dignitaries.