Crowds listed to speeches and chanted slogans outside the city's legislature where the march ended. 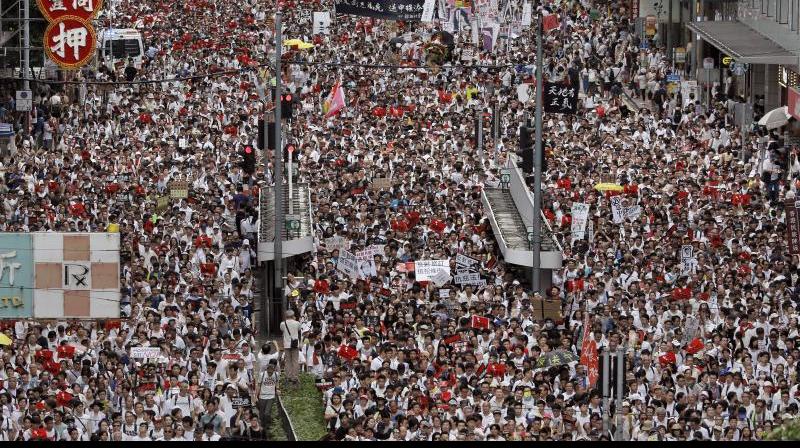 Hong Kong: They came from all walks of life, a sea of white-clad Hong Kongers, braving hours in the tropical heat and galvanised by fear that their unique city is being subsumed by China.

The international financial hub has seen plenty of political turbulence over the last decade as concern mounts that its freedoms and culture are being undermined by a resurgent Beijing. But even by Hong Kong's track record for eye-catching protests, Sunday's demonstration against the city government's plans to allow extraditions to the mainland was historic.

It began with crowds of peaceful marchers stretching out for miles – families with flag waving toddlers, grandparents in wheelchairs, expats and business types, musicians banging drums, artists, activists and more. Most chose the colour white to represent justice. But it ended with angry masked youths fighting running battles through the night with riot police.

In many ways, it was a cross-section of what Hong Kong now is. Throughout the day protesters delivered the same message: they do not trust assurances that the city's freedoms, guaranteed by the 1997 handover deal with Britain, will remain intact if China's courts are allowed to extradite people. "If it (the bill) is passed, it would blur the line between Hong Kong and the mainland," protester Ryan Leung told AFP. "It would totally destroy the freedoms we've always had, and the rule of law that we are so proud of."

Recent moves by China have rattled nerves. Many demonstrators cited the disappearance of a group of booksellers from the city who later turned up in Chinese custody confessing to crimes on state television.

The men had published lurid tomes about China's leaders and one of them has since fled to Taiwan, saying the risk of extradition is too high. "Even before the law we have seen the bookseller cases," fumed Fiona Lau, 15, one of the many young faces in the crowd.

"After the bill is passed, our situation will become even more severe. We cannot let this happen. The Hong Kong government and the Chinese government are not on an equal footing," added Chan Sze-chai, a member of Hong Kong University Students' Union Council.

He believed that if China's leaders wanted to extradite a dissident or use other charges to muzzle activists "there's nothing the Hong Kong government can do."

"So there's no way that Hong Kong citizens should trust Chinese government and the Hong Kong government," he concluded. Shaun Martin, a Briton who has lived in the city for more than five years, said the detention in China of two Canadians immediately after a senior Huawei executive was arrested in Vancouver prompted him to hit the streets.

He feared reprisal arrests could one day come to Hong Kong as a new chill sets in between China's leaders and western powers. "People like myself, expats, are really, really cautious about this type of thing, thinking that China could actually come and impose those types of tit-for-tat kind of arrests without a warrant," he said.

As the sun set over the harbour there was a festive atmosphere. Crowds listed to speeches and chanted slogans outside the city's legislature where the march ended. When organisers read out the estimated crowd figure of 1,030,000 there was a roar of approval. "Hong Kong has made history," Jimmy Shum, one of the organisers told the crowd.

"If the government do not respond to that, and we give them a deadline of tomorrow, we believe we must escalate our action," added Bonnie Leung, another organiser. Within hours action had already been escalated. Police used batons and pepper spray to clear out a group that had vowed to stay overnight outside the Parliament.

The protesters, many young and wearing masks, fought back, hurling bottles and building improvised barricades. After pro-democracy demonstrations failed to win concessions four years ago, many of Hong Kong's youth have become more hardline, arguing that peaceful protests have failed.

Some have even begun advocating for full independence – a red line for Beijing. "I'm on an emotional roller coaster tonight," said Philip Leung, 23, who saw police and the hardline protesters clash.

"We have simple aims, we want what is good for Hong Kong. But if the government keeps ignoring the opinion of more than one million people, how can Hong Kong still be free? That is why so many young people are still out right now," he said.