The head of operation, Narongsak Osottanakorn, said rescuers had learned from experience and faster in bringing 2nd batch of survivors out. 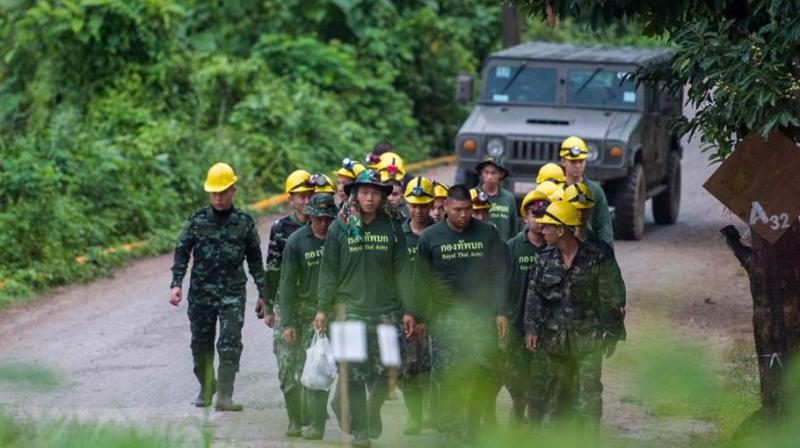 Four boys among the group of 13 trapped in a flooded Thai cave for more than a fortnight were rescued on July 8 after surviving a treacherous escape, raising hopes elite divers would also save the others soon. (Photo: AFP)

Chiang Rai: Rescuers resumed preparations on Tuesday for a third rescue operation deep into a cave complex in northern Thailand to free four remaining boys and their soccer coach in a race against time and monsoon weather.

Four more of the boys were carried on stretchers out of the labyrinthine Tham Luang cave on the Myanmar border on Monday, bringing to eight the total number brought out so far after two rescue pushes in successive days.

The head of the operation, Narongsak Osottanakorn, said rescuers had learned from experience and were two hours faster in bringing the second batch of survivors out as scattered monsoon rains continued to risk flooding the tunnels with water.

A crack team of foreign divers and Thai Navy SEALs guided the boys during a nine-hour operation through nearly 4 km (2.5 miles) of sometimes submerged channels from where they have been trapped for more than a fortnight.

People across Thailand cheered the rescue operation, including at the Mae Sai Prasitsart school where six of the trapped boys are students.

“I am very happy about those who already made it out and I think everyone will be out today,” said Waranchit Karnkaew, 14, who also said the football-mad boys had been closely following games at the World Cup in Russia before they were trapped.

“I want to take my friends to lunch and we will play football together,” he told Reuters.

Soccer’s governing body, FIFA, has invited the boys to the World Cup final in Moscow on Sunday if they make it out in time.

Rescue organisers say they need 20 hours to replan and replenish oxygen supplies, with the next rescue mission expected to come some time on Tuesday afternoon, weather permitting.

However, organisers declined to confirm whether they would attempt to bring all five out in the third push, with the plan so far being to bring out four at a time.

“It is up to the environment. If the rain god helps us, then we may be able to work fast. But if the rain god doesn’t help, then it could be challenging,” Narongsak said.

The plight of the boys and their coach has drawn international attention, with divers, engineers and medics among others flying in from around the world to assist.

Technology billionaire Elon Musk went into the cave on Monday and left the rescue team with a “kid-sized” submarine his company SpaceX had built, Thailand’s interior Minister Anupong Paochinda said.

Musk said on Twitter: “Just returned from Cave 3. Mini-sub is ready if needed. It is made of rocket parts & named Wild Boar after kids’ soccer team. Leaving here in case it may be useful in the future.”

Prime Minister Prayuth Chan-ocha visited the cave to inspect the operation and was quoted by Narongsak as saying he didn’t want to see this kind of incident happen again on Thai soil.

The “Wild Boars” team became trapped on June 23 when they set out to explore the cave after soccer practice and rains flooded the tunnels.