Tibetan activists like Tsundue are urging India to realise what exactly Beijing is up to: Bullying India. 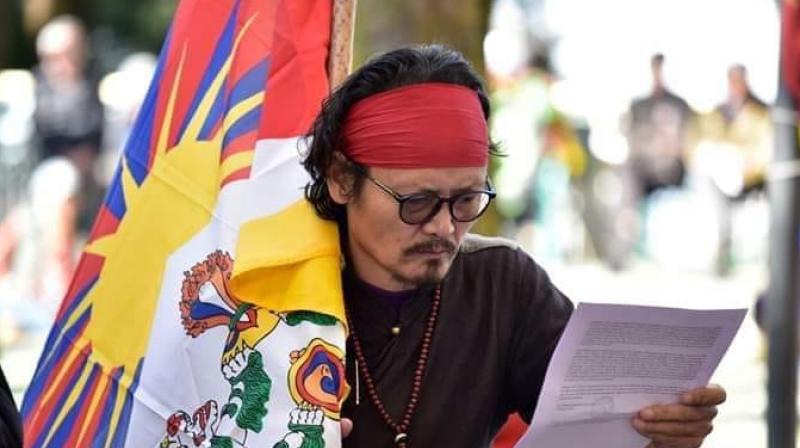 Tenzin Tsundue first came into spotlight in 2002, when he climbed the scaffolding outside the Mumbai hotel where erstwhile premier Zhu Rongji was staying, displaying a banner which read "Free Tibet: China, Get Out" and the Tibetan national flag.

Now that Tibet is back in the news, kind courtesy of PLA’s action in Galwan Valley, Tibetan activists like him are urging India to realise what exactly Beijing is up to: Bullying India.

Tsundue, now a well-known figure in the Tibetan Independence movement, says Tibetan independence is the best security for India against China.

In fact, Tibet, with its contiguous border with India, has indirectly been involved in all India-China border disputes since 1959, when Tibet began to be governed by the Chinese as the Tibet Autonomous Region (TAR) after the PLA militarily annexed it.

Speaking to The Asian Age, the writer and activist dwells on the question of Tibet vis-à-vis the tense relationship between India and China, among others things. Edited excerpts:

As a Tibetan, what do you make of China's recent aggression in eastern Ladakh?

India is not yet getting a sense of what happened at Galwan Valley. It was a blatant bully of India. The Chinese came into India after breaching the mutually understandable border. Indians must understand this: Chinese have been building the infrastructure across the border since 1966, when the Nehruvian idea of "not a single blade of grass grows there" was prevalent. India,too, can build its infrastructure and China cannot stop it. China attacked India from our country (Tibet) which, as an Indian and Tibetan, made me doubly sad.

Amid the pandemic, whose source is said to be Wuhan, and the border standoff, China is under international scrutiny. Do you see hopes for increased global support for free Tibet?

No country in the international arena, especially the Western nations, will speak up for Tibet as they have fallen prey to China's economic might. China does not respect any international treaties and laws. Look at the South China Sea dispute. China lost the case in the international court but that has not deterred it from re-staking claim. Yes, China's mask is now coming out gradually but for all these years, most politicians did not utter a word against Beijing.

The spectre of China looms large in the neighbourhood, especially in Bhutan and Nepal. How does the China factor impact India vis-à-vis its approach towards Tibet?

First and foremost, we must call it the Tibet border and not the China border. That would be a recognition that China has illegally held our land. But after India’s humiliation in the 1962 war, Indian politicians and the general populace seems to have developed a fear psychosis about Beijing. If India does not do anything about this fear psychosis, it won't be able to counter China effectively.

Moreover, there is very little knowledge about Tibet even among the educated, let alone the politicians. This is an impediment to understand the larger geopolitical dynamics in the Himalayas. India must realise that it shared a border with Tibet for Centuries and that China is an alien nation whose ultimate goal is to be the global ruler. This is not fear mongering but the truth.

There has been a clamour to award the Dalai Lama with Bharat Ratna, while some on social media even wanted the Shantipath in Chanakyapuri to be named after the Dalai Lama. Will these symbolic gestures help?

The demand to award Bharat Ratna to the Dalai Lama has been a longstanding one. But I don't really think that the Government of India is currently convinced enough to do that. It will be a great gesture. But it must be a genuine gesture and not a political decision to score a point over China.

When it comes to renaming Shantipath, it seems to be only a rhetorical and tongue-in-cheek response to the Chinese aggression against India. There is no point in talking about it as these social media-fuelled responses won’t go any further.

You have already termed fear psychosis as a reason for India’s cautious approach towards China. What is your historical understanding behind it?

Until the 1962 war, Nehru and Indian intellectuals were romanticising Communist China in the spirit of “Hindi-Chini Bhai Bhai”. Nehru saw Mao Zedong consolidating his power and signed the Panchasheel agreement, which recognised Tibet, covering 2.8 million square kilometres area, as part of China. Beijing also illegally occupies East Turkestan, Inner Mongolia and Manchuria. These regions and Tibet constitute over 60 per cent of present-day China.

After China backstabbed, as I already said, fear psychosis took over and it remains in place even today. Did you hear PM Modi mentioning China in his recent speech in Ladakh? No, right? China is not Pakistan, which could be broken up in 1971. It is a much bigger power to face. The fear psychosis has meant that India does not have a Tibet policy till date.

What do see as the way forward for the Tibet issue with respect to India?

Firstly, India needs to have a formal Tibet policy. Currently, it is nothing but the “One China” policy. India needs to junk that policy. While India continues to adhere to it, China does not. Look at its posturing over Kashmir. If there is no reciprocation from China, India should rethink the policy. This is diplomatic lopsidedness. It is wrong to say India is economically dependent on China. Trade is imbalanced but we are largely self-sufficient. If ‘Atmanirbhar Bharat’ works and India develops closer links with Vietnam and Taiwan etc, things will be fine.

At this moment, China is on the backfoot. It is time to take a firm stand and leverage the Tibet issue internationally. Intellectuals have been saying that Tibet is an alternate card for India. It is time to use it now. International politics is self-serving. That India has given refuge to Tibetans is a part of a long-term strategy to keep leverage over China. Till now, it hasn’t leveraged the cause to its full extent. Remember: An independent Tibet is India’s best security.

A hypothetical question: What if Tibet had been an independent country right now? How would the present scenario have panned out?

Independent Tibet would have been a brotherly neighbour to India. We would have not interfered in anyone's internal matters. We believe in peace and compassion. That’s what our Buddhist culture teaches. In fact, when the Dalai Lama was told that Tibet had 8,000 soldiers, he thought it was larger than required force and wanted to reduce it! Tibet would have been like present-day Bhutan but much larger in size.