The US visit to Taiwan: What's all the fuss about?

China is sensitive to any move that could amount to official recognition of Taiwan, such as when Tsai spoke to Trump after his election 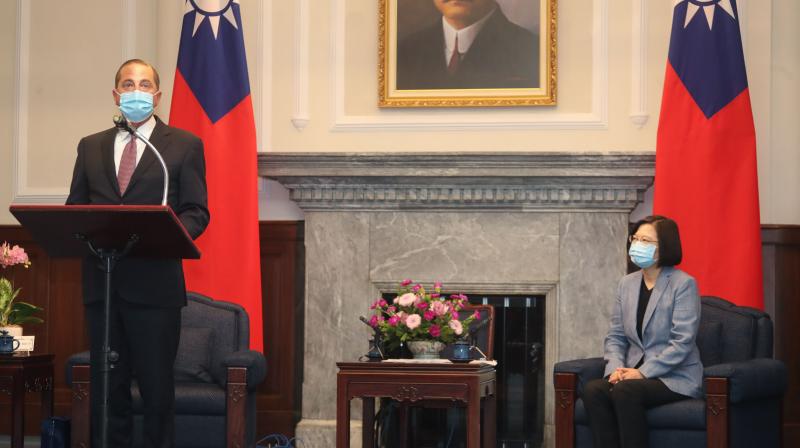 Taipei:  Why has the United States' highest-level visit to Taiwan for four decades sparked such anger from Beijing?

Here is a recap of the key issues surrounding the delicate relations between the US, China and Taiwan.

The deep rift between China and Taiwan dates back to China's civil war, which erupted in 1927 and pitted forces aligned with the Communist Party of China against the Nationalist Kuomintang (KMT) army.

From there, Chiang continued to claim the entirety of China -- just as the mainland claimed Taiwan.

For years both sides still formally claimed to represent all of China, although that landscape has changed in recent decades.

Since the late 1990s, Taiwan has transformed from an autocracy into a vibrant democracy and a distinct Taiwanese identity has emerged.

The KMT, now in opposition, is more supportive of better ties with Beijing, especially on trade and maintains the idea that Taiwan is part of China.

Washington cut formal diplomatic relations with Taiwan in 1979, switching recognition to Beijing as the sole representative of China, with the mainland becoming a major trading partner.

But the United States at the same time maintained a decisive, if at times delicate, role in supporting Taiwan.

Under a law passed by Congress, the United States is required to sell Taiwan military supplies to ensure its self-defence against Beijing's vastly larger armed forces.

In recent decades US presidents have been somewhat reluctant to sell big-ticket items to Taiwan, fearful of incurring Beijing's wrath.

US President Donald Trump's administration has no such qualms and has approved a string of military sales, including an $8 billion fighter jet deal to replace Taiwan's ageing fleet.

In 1992, Taiwan and mainland China both pledged there is only "one China" but they agreed to disagree about what precisely that meant.

Only 14 nations, all in the developing world, and the Vatican still recognise Taiwan.

Beijing has tried hard to stop any international recognition for the island.

The United States, while recognising Beijing, is deliberately careful in its wording.

The United States says only that it "acknowledges" Beijing's claim to Taiwan -- and leaves it for the two sides to work out a solution while opposing any use of force to change the status quo.

In practice, Taiwan enjoys many of the trappings of a full diplomatic relationship with the United States.

While there is no US embassy in Taipei, Washington runs a centre called the American Institute in Taiwan. In the United States, the island's diplomats enjoy the status of other nations' personnel.

Beijing is sensitive to any move that could amount to official recognition of Taiwan, such as when Tsai spoke by telephone to Trump after his election but before his inauguration.

The United States has pushed for Taiwan to be included in UN bodies such as the World Health Organization.

The topic is sure to come up during the visit of Alex Azar, the secretary of health and human services, who like many around the world has praised Taiwan's effective response to the novel coronavirus pandemic.