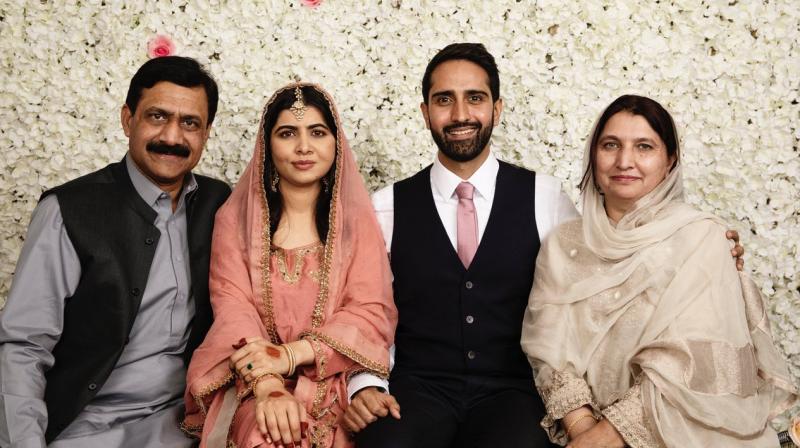 The 24-year-old posted a few pictures of the ceremony along with her husband Asser Malik and family members. (Photo: Twitter/@Malala)

London/Karachi: Nobel Laureate and Pakistani activist for girls' education Malala Yousafzai has tied the knot with a top-ranked officer of the Pakistan Cricket Board in a small ceremony in the UK.

Yousafzai gained international recognition for her activism against the Taliban's efforts to stop girls from attending school in Pakistan.

Announcing her marriage on Twitter, the 24-year-old posted a few pictures of the ceremony along with her husband Asser Malik and family members.

Decked up in a tea pink suit and simple jewellery, Yousafzai is seen carrying out the wedding formalities in her home in Birmingham with Malik, where he has gone on vacation.

"Today marks a precious day in my life. Asser and I tied the knot to be partners for life," she said in a tweet.

"We celebrated a small nikkah ceremony at home in Birmingham with our families. Please send us your prayers. We are excited to walk together for the journey ahead," Yousafzai, who is an avid cricket fan and a supporter of the Pakistan team, said.

The couple first met two years back and since then have been in touch and formed a close friendship and later decided to get married with the consent of their families.

According to a source in the PCB, Malik is a top performing officer in the cricket board.

"But due to his hardwork and output he has now been promoted to the post of general manager, the source said.

Yousafzai's recent comments on marriage to an international fashion magazine had stirred controversy.

In an interview to Vogue magazine in June, Yousafzai, an Oxford graduate, revealed that she is not sure if she will ever marry.

I still don't understand why people have to get married.

"If you want to have a person in your life, why do you have to sign marriage papers, why can't it just be a partnership? she had said.

When she was 15, she was shot in the head by a member of the Taliban in October 2012 and was flown to the UK to receive treatment.

In 2014, she won the Nobel Peace Prize at the age of 17, becoming the youngest laureate of the prize.

She shared the prize with child rights activist Kailash Satyarthi.

Last year, she graduated from Oxford University with a degree in Philosophy, Politics and Economics.