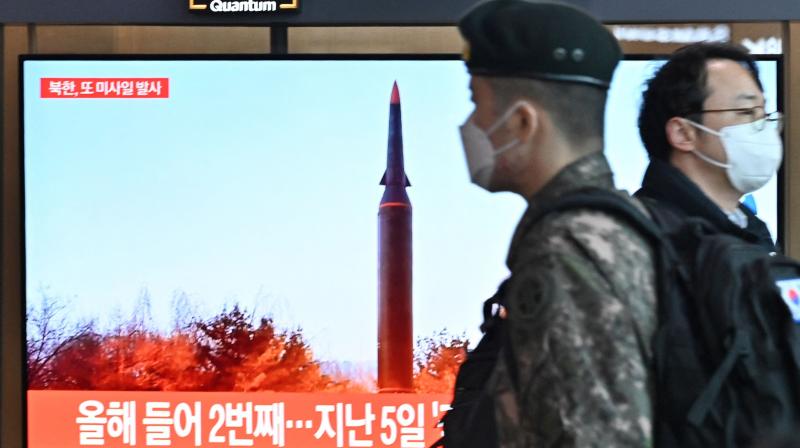 People walk past a television screen showing a news broadcast with file footage of a North Korean missile test, at a railway station in Seoul on January 11, 2022, after North Korea fired a "suspected ballistic missile" into the sea, South Korea's military said, less than a week after Pyongyang reported testing a hypersonic missile. (Anthony WALLACE / AFP)

The early-morning launch came as the UN Security Council met in New York to discuss last week's test of what Pyongyang called a hypersonic missile, although Seoul has cast doubt on that claim.

After an emergency meeting, South Korea's national security council expressed "strong regret over the launch", according to a statement from the president's office.

There were no immediate reports of damage to Japanese aircraft or vessels, according to government spokesman Hirokazu Matsuno.

"(The suspected missile) is estimated to have flown approximately up to 700 kilometres and landed outside of Japan's exclusive economic zone," he said.

Seoul's Joint Chiefs of Staff said it had been fired from land at around 7:27 am local time (2227 GMT on Monday).

Pyongyang's second test in a week came after six countries, including the United States and Japan, urged North Korea Monday to cease "destabilising actions" ahead of a UN Security Council closed-door meeting.

France, Britain, Ireland and Albania joined the call for North Korea to "engage in meaningful dialogue towards our shared goal of complete denuclearization".

Analysts said Pyongyang had likely planned the latest launch to coincide with the UN meeting.

"North Korea continues testing to diversify its nuclear arsenal, but it timed the launch on the day of the UNSC meeting to maximise its political impact," Shin Beom-chul, a researcher at the Korea Research Institute for National Strategy, told AFP.

The frequency of testing indicated Pyongyang could be fitting in the launches ahead of the Beijing Olympics next month, said Park Won-gon, a professor at the Ewha Womans University in Seoul.

North Korea has been barred from the Beijing Winter Olympics after skipping the pandemic-delayed Tokyo Games over Covid-19 concerns, a move Pyongyang has blamed on "hostile forces".

In the decade since leader Kim Jong Un took power, North Korea has seen rapid progress in its military technology at the cost of international sanctions.

In 2021, nuclear-armed North Korea said it had successfully tested a new type of submarine-launched ballistic missile, a long-range cruise missile, a train-launched weapon, and what it described as a hypersonic warhead.

A second hypersonic test so soon could indicate last week's launch was actually a failure, said Kim Dong-yub, a professor at the University of North Korean Studies.

"It's hard to understand why they would carry out another test less than a week after they announced a success," he added.

Hypersonic missiles move far faster and are more agile than standard ones, making them much harder for missile defence systems -- on which the United States is spending billions -- to intercept.

They were listed among the "top priority" tasks for strategic weapons in North Korea's current five-year plan, and it announced its first test -- of the Hwasong-8 -- in September last year.

The tests come as North Korea has refused to respond to US appeals for talks.

Instead of the policy positions on diplomacy, for which Kim's New Year statements are closely watched, he focused on food security and economic development.

Dialogue between Washington and Pyongyang remains stalled and the country is under multiple sets of international sanctions over its nuclear and ballistic missile programmes.

The impoverished nation has also been under a rigid self-imposed coronavirus blockade that has hammered its economy.