The Rohingya men from the northern Rakhine village of Inn Din were buried in a mass grave in September 2017 after being hacked to death. 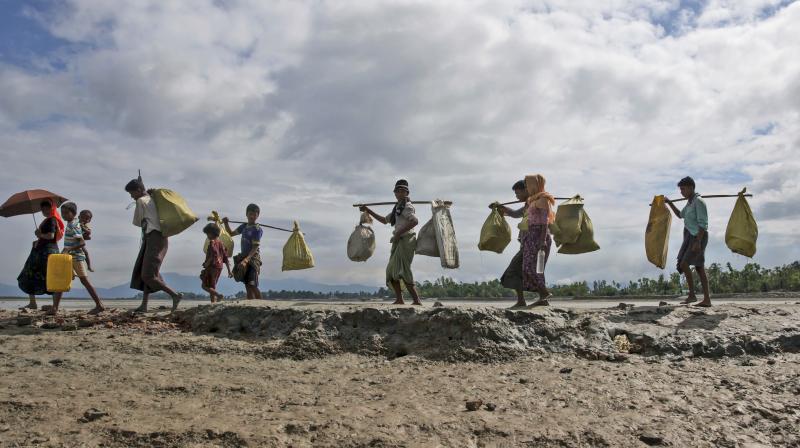 The United Nations and the United States described it as ethnic cleansing, an accusation which Myanmar denies. (Photo: File)

Yangon: Seven Myanmar soldiers have been sentenced to “10 years in prison with hard labour in a remote area” for participating in a massacre of 10 Rohingya Muslim men in a village in northwestern Rakhine state in September 2017, the army said on Tuesday.

The military said in a statement published on Commander-in-Chief Min Aung Hlaing’s office Facebook page that seven soldiers have had “action taken against them” for “contributing and participating in murder”.

The massacre was being investigated by two Reuters journalists - Wa Lone, 31, and Kyaw Soe Oo, 28 - who were subsequently arrested in December and are still behind bars facing charges of violating the country’s Official Secrets Act.

The authorities in February said that the military opened an internal investigation independently and that it is unrelated to the Reuters reporters who are accused of obtaining unrelated secret government papers.

The Rohingya men from the northern Rakhine village of Inn Din were buried in a mass grave in September 2017 after being hacked to death or shot by Buddhist neighbours and soldiers.

The murders were part of a larger army crackdown on the Rohingya, beset by allegations of murder, rape, arson and looting, unleashed in response to Rohingya militant attacks on security forces in late August.

It added that legal proceedings against the police personnel and civilians “involved in the crime” are still under way.

On January 10, the military said the 10 Rohingya men belonged to a group of 200 militants who had attacked security forces. Buddhist villagers attacked some of them with swords and soldiers shot the others dead, the military had said.

The military’s version of events is contradicted by accounts given to Reuters by Rakhine Buddhist and Rohingya Muslim witnesses published in the February story.

Buddhist villagers reported no attack by a large number of insurgents on security forces in Inn Din. And Rohingya witnesses said that soldiers plucked the 10 from among hundreds of men, women and children who had sought safety on a nearby beach.
Nearly 700,000 Rohingya have fled Rakhine state and crossed into southern Bangladesh since August, creating one of the world’s largest refugee camps.

A court in Yangon has been holding preliminary hearings since January to decide whether the two Reuters reporters will be charged under the colonial-era Official Secrets Act, which carries a maximum penalty of 14 years in prison.

On Wednesday, the judge will rule on a motion by defence lawyers for dismissal of the case.