Saying both countries have potential for expanding bilateral trade, he called for relaxing trade barriers. 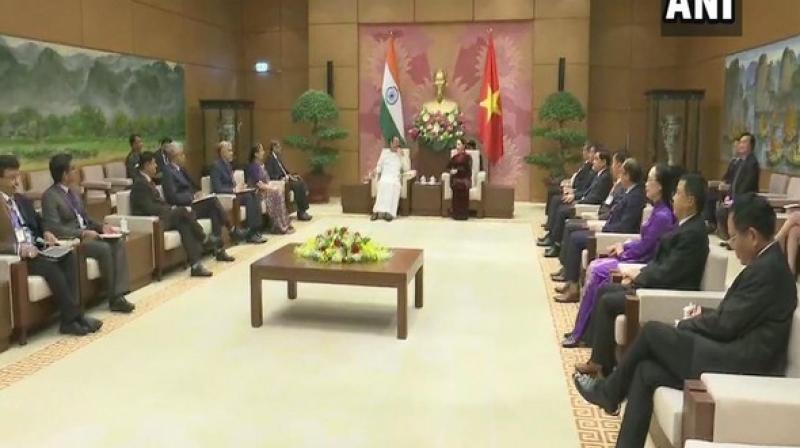 'Our discussions covered the whole range of bilateral and multilateral cooperation,' Naid, who is on a four-day visit to Vietnam said. (Photo: ANI)

Hanoi: Vice President Venkaiah Naidu on Friday met his Vietnamese counterpart Dang Thi Ngoc Thinh and various other Vietnam leaders and expressed hope that countries would reach a consensus on "code of conduct in the South China Sea".

Naidu, who is on a four-day visit to Vietnam said that his talks with Dang were extensive and productive. "Our discussions covered the whole range of bilateral and multilateral cooperation," he added.

In a joint press statement issued along with Dang, Naidu said that both India and Vietnam were fully committed to an open, transparent, inclusive and rules-based regional architecture based on freedom of navigation and overflight, unimpeded economic activities and peaceful settlement of disputes in accordance with the international law.

Saying both countries have the potential for expanding bilateral trade, he called for relaxing trade barriers and facilitating free trade between the two countries.

Noting that the trade between both the countries has increased three-fold in the last three year, Naidu expressed confidence of achieving bilateral trade target of USD 15 billion by 2020.

The Vice President also extended an invitation to Dang.