The youth-led movement has radicalised a new generation of protesters unlikely to go readily back into their box. 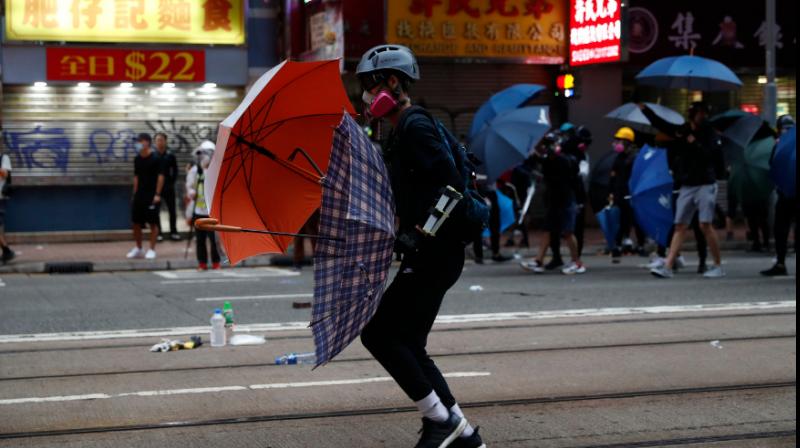 'No one showed up! Only me! Wearing a mask to show off! This is quite disappointing,' said the 20-year-old. (Photo: AP)

Hong Kong: Ronald sacrificed his lunchtime to join the protest in a Hong Kong park. He quivered at the prospect of communing with hundreds of like-minded office workers stirred by the organizers' rallying cry, "Revolution is a duty!" He was on time. He was wearing a new black face mask. He was fired up. He was ready.

He was also utterly alone.

Confused, shocked and more than a little sad as he gazed unbelieving around the empty park with a grand total of exactly one protester — him — the office intern drew this conclusion: Hong Kong's establishment-shaking protest movement, which has plunged the international business hub into crisis and seemed to have boundless reserves of determination, energy, creativity and popular support, might finally be losing a little steam as it enters its fifth month.

"No one showed up! Only me! Wearing a mask to show off! This is quite disappointing," said the 20-year-old.

Ronald wouldn't give his surname. Not because he was afraid to, he insisted, but to spare any embarrassment for friends who might read somewhere that he'd answered the call to rally Wednesday lunchtime amid the skyscrapers of Hong Kong's central business district and feel ashamed they'd not made the effort to join him.

Ronald said another protest he'd attended the previous evening, in the more residential Tsuen Wan district, was almost as much of a let-down: It drew just five participants.

"People are losing their passion," he said. "At the start of the protests ... hundreds of people would show up, even if they are working."

The coming days will tell whether Ronald's suspicions are accurate. If this weekend doesn't again draw out the number of demonstrators seen as recently as Sunday, it could be a signal that protesters are growing tired, divided and becoming less of a challenge to the government of the semi-autonomous Chinese territory and its masters in Beijing.

Carrie Lam, Hong Kong's embattled chief executive, will draw further encouragement if a quiet weekend is then followed by her not being besieged by demonstrators when she delivers an annual policy address on Wednesday.

But that is a lot of ifs.

Given that Lam isn't expected to announce an amnesty for arrested protesters or use her speech to bow to the movement's other key demands, she's still a long way from assuaging the fury that has turned Hong Kong into a powder keg.

And with Lam not budging on protesters' clamors for universal suffrage, an investigation of heavy-handed policing and other demands, any lull is likely to be temporary. The youth-led movement has radicalised a new generation of protesters unlikely to go readily back into their box. Nearly one-third of the 2,379 people arrested since June are under 18 and 104 of them are under 16, the government says.

Fears that Hong Kong is slowly losing its freedoms and is on course to become a tightly controlled city like all the others in China are widely shared and cross-generational. Protesting, from wearing black and spraying graffiti to occasional outbursts of street violence, is becoming Hong Kong's new norm, gradually engraining in its habits like shopping, snacking and the lighting of incense sticks as offerings.

As Ronald turned tail and trudged back to work, 500 meters (yards) away outside the High Court, 300 masked protesters chanting "Revolution Now!" and there to support an activist appealing his six-year prison sentence showed that even if the movement is indeed flagging, it is far from snuffed out.