More than 700 people were injured in the quake, many seriously, according to the country’s disaster agency. 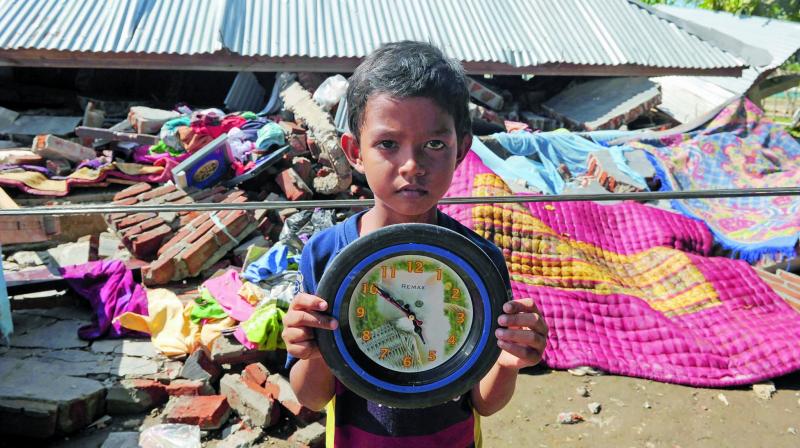 Jakarta: Tens of thousands of people have been displaced after a devastating c in Indonesia killed more than 100 people, an official said Saturday, leaving communities in ruins as aid trickled into the disaster-stricken province.

“We have 45,300 people evacuating in several places as of Saturday morning,” national disaster agency spokesman Sutopo Purwo Nugroho told AFP, adding that the number of displaced had almost doubled since Friday due to an influx of new data.

The shallow 6.5-magnitude quake earlier this week levelled hundreds of homes, mosques and businesses across Aceh province, one of the areas worst affected by the devastating 2004 tsunami.

More than 700 people were injured in the quake, many seriously, according to the country’s disaster agency.

Most of the displaced spent the night outdoors in tents near their ruined homes as hundreds refused to move into shelters fearing aftershocks, Nugroho added.

The army has established kitchens, shelters and a field hospital in the hard-hit town of Meureudu to help the region’s overwhelmed health facilities.

Indonesian President Joko Widodo visited Meureudu Friday, pledging to rebuild the area’s devastated communities as he called on Indonesians to pray for their countrymen.

The archipelago nation experiences frequent seismic and volcanic activity due to its position on the Pacific “Ring of Fire”, where tectonic plates collide.

A huge undersea earthquake in 2004 triggered a tsunami that engulfed several countries around the Indian Ocean, killing more than 170,000 people in Indonesia alone, the vast majority in Aceh.

The province lies on the northern tip of Sumatra island, which is particularly prone to quakes.

In June a 6.5-magnitude quake struck off the west of Sumatra, damaging scores of buildings and injuring eight people.

On Friday, Indonesian President Joko Widodo pledged to help the people of Aceh rebuild as he toured areas worst-hit by the devastating earthquake.

Pope Francis also offered his prayers to the victims overnight, urging them strength in their toughest hour.

Mr Widodo, who flew to Aceh Friday, met with victims in hospitals before visiting a local mosque damaged in the quake.

“We will rebuild this mosque as soon as possible,” he had told the gathered crowd.