Taliban wants talks with US, but gives conditions 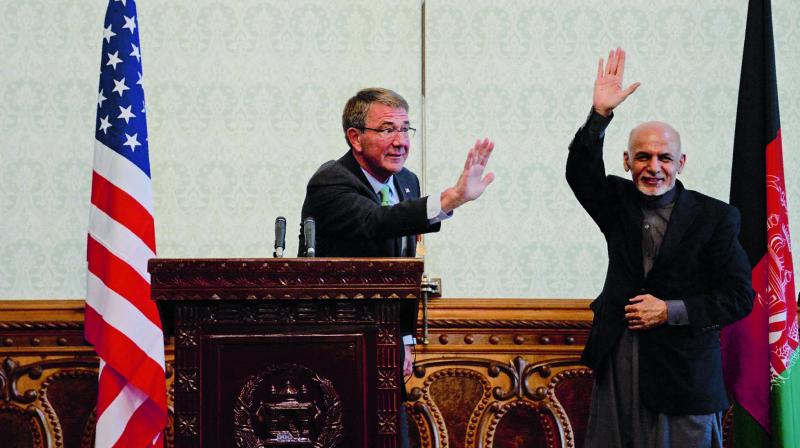 US secretary of defence Ashton Carter and Afghan President Ashraf Ghani at a joint press conference in Kabul. (Photo: AFP)

Kabul: The Taliban militant group in Afghanistan has reportedly put forward new demands for ending its insurgency in the country, including direct talks with the United States.

The new conditions also include recognition of the political office of the group in Qatar and removal of group’s members from the United Nation’s blacklist.

“That is why there is need for America and its allies to come to the table for direct talks with the Islamic Emirate (the Taliban) for negotiating an end to the occupation,” Sohail Shaheen, a Qatar-based spokesman of the group, was quoted by The News as saying.

Mr Shaheen added if peace is the objective of the other side, then the Taliban must be allowed to open their “political office” in Qatar and names of their senior members be removed from the UN blacklist.

“These obstacles in the way of establishing peace cannot be simply ignored,” Mr Shaheen said, warning that “mere slogans and statements” would further complicate the issue rather than promoting Afghan peace.

This comes as reports emerged earlier suggesting peace talks could likely kick off between the Afghan government and Taliban group.

In October, some media reports suggested that a three-member delegation from the Taliban’s Qatar office was in Pakistan to meet authorities - the first such contact following the breakdown of Islamabad-brokered talks between Kabul and the Taliban in May.

Earlier, the Taliban leaders reportedly also held informal meetings with Afghan and US officials in Qatar.

Pentagon chief Ashton Carter had also sought to reaffirm US commitment to Afghanistan on Friday, as uncertainty lingers over President-elect Donald Trump’s strategy on America’s longest war in the face of a resilient Taliban insurgency.

Mr Carter met Afghan President Ashraf Ghani and American troops on his last official trip to Afghanistan before he handed over the reins to Mr Trump’s pick for defence secretary, the hardline retired general James Mattis.

Mr Carter’s surprise visit to Afghanistan came as concerns mount over growing insecurity in Afghanistan, where around 10,000 US troops are assisting struggling Afghan forces to combat a dogged Taliban insurgency along with Al-Qaeda and Islamic State militants.

“America is, and will remain, committed to a sovereign and secure Afghanistan,” Mr Carter told reporters at a joint press conference with Mr Ghani.

“We stand with the people of Afghanistan who have put themselves at risk and sacrificed so much.”

Mr Ghani had then thanked Mr Carter for the US military support and the sacrifices of American troops in Afghanistan, even as uncertainty looms over Mr Trump’s presidency.