Lantern-maker Lin Chow-chin is part of a growing movement on the island to make the celebrations greener, creating sustainable lights. 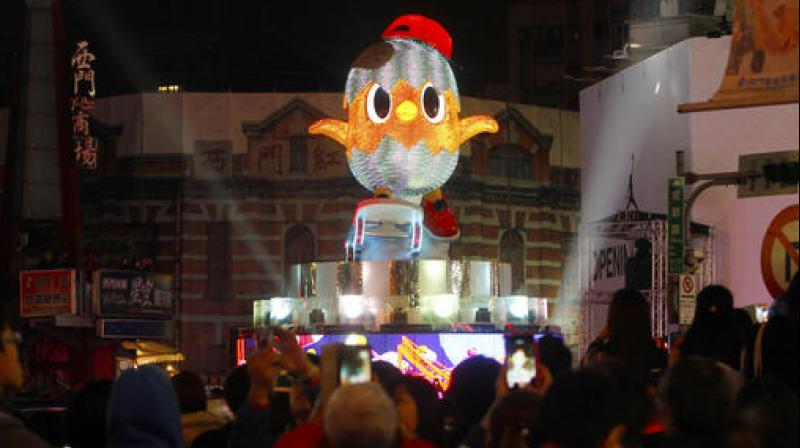 Visitors gather around a large lantern of a chick hatching displayed to mark the Year of the Rooster at the Lantern Festival in Taipei, Taiwan. (Photo: AP)

Taipei: As Taiwan lights up for the start of its annual lantern festival this weekend, one eco-friendly craftsman is breaking with tradition.

Lantern-maker Lin Chow-chin is part of a growing movement on the island to make the celebrations greener, creating sustainable lights which can be converted into everything from desk lamps to flower vases.

Each year huge electric sculptures go on display in Taiwan's major cities, children carry tiny disposable lanterns and the skies fill with floating lights for the festival that marks the end of two weeks of Lunar New Year festivities.

Environmentalists say used lanterns are not properly recycled and pile up as rubbish, while batteries inside them contain hazardous chemicals that cause pollution.

Lin hopes to help combat the problem by creating lanterns which owners will want to keep rather than discard.

He experimented with making them in his youth and even considered exporting them as a business -- but gave up the dream for a steady post office job.

After retiring seven years ago, Lin reignited his passion -- with a new twist.

"I don't want to see lantern-making become a fading art so hopefully the creative, environmental and practical aspects can appeal to more young people," he tells AFP.

Lin's colourful lanterns come in a range of shapes and sizes, some using recycled paper, leaves and plant fibres.

His main aim is to make them reusable.

Lin has patented a removable plastic stopper that connects to a light bulb inside the lantern.

When the bulb is taken out, users can connect the stopper to a water bottle and recycle the lantern as a vase.

Some of the lantern frames are made from self-assembled cardboard cut-outs which Lin says are popular with students as they can be used as pen holders, and come with spare parts that can be modelled into sculptures and business card holders.

It is still a small business and Lin makes all the lanterns himself from home, selling around 800 a year by word of mouth.

But interest in his art has seen him conduct workshops across Taiwan and stage exhibitions in Hong Kong and mainland China.

"It's rewarding to see my students embrace my ideals and come up with their own creations," says Lin.

Campaigners say they do not want the lantern festival to disappear, just to improve.

Liu Jyh-jian, vice director of the Taiwan Environmental Protection Union, says the focus should be on the "content, not the size" of the celebrations.

Taiwan's tourism bureau, which sponsors the island's biggest lantern celebrations, featuring huge electric lights in the shape of zodiac animals, says the creations are now being "adopted" after the festival, mostly by schools and local government departments.

Mountainous Pingshi town in northern Taiwan is at the vanguard of the new green push.

Special hiking groups head out into the hills to retrieve thousands of floating lanterns which are released into the sky then fall to earth.

Authorities there are also offering cash or small gifts as rewards for recycling.

Hu Min-shu, a veteran sky lantern maker who uses recycled materials and is head of an association promoting the craft in Pingshi, says up to 90 percent of used lanterns are now recycled there.

"Of course, we hope to achieve a 100 percent recycling rate," he says.

"The whole town is mobilised."