Erdogan said it was "only a matter of time" before the allied forces took full control of the flashpoint town. 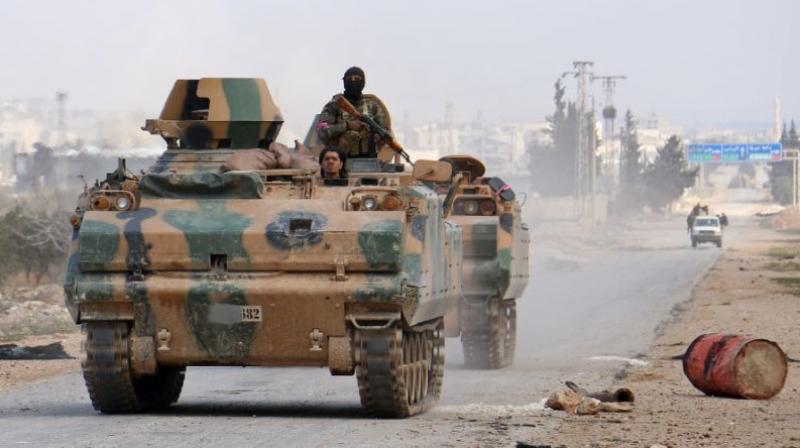 Turkey-backed opposition fighters advance in an armoured personnel carrier outside the northern Syrian town of al-Bab during a drive to retake control from the Islamic State group on February 9, 2017 (Photo: AFP)

Istanbul: President Recep Tayyip Erdogan on Sunday said Turkish troops and their Syrian rebel allies have entered the centre of the Islamic State-held bastion Al-Bab, saying its capture was just a "matter of time".

"Al-Bab is now besieged from all fronts ... Our forces entered the centre" with Syrian rebels, Erdogan told journalists in Istanbul before leaving for a tour of Gulf countries.

Erdogan said it was "only a matter of time" before the allied forces took full control of the flashpoint town.

Turkish forces and allied rebels on Saturday entered Al-Bab to drive IS jihadists from the flashpoint northern town, the Syrian Observatory for Human Rights said.

The Turkish army launched an ambitious campaign inside Syria on August 24 codenamed Euphrates Shield to clean its border from IS jihadists and stop the advance of Kurdish militia.

But the clashes in Al-Bab have proved the toughest in the campaign, with Turkish military fatalities surging.

One Turkish soldier was killed and three others wounded in clashes with jihadists on Sunday, the private Dogan news agency reported, citing military sources.

The latest casualty raised the number of Turkish troops killed in the Syria offensive to 67.

The three injured troops were evacuated from Al-Bab and taken to hospitals in Turkey's Kilis and Gaziantep provinces near the Syrian border, Dogan reported.

Al-Bab is the jihadist group's last stronghold in the northern province of Aleppo and is also being targeted by regime forces.