The video shows several of 'Wild Boars' football team in hospital, after being rescued from Tham Luang cave in northern Thailand. 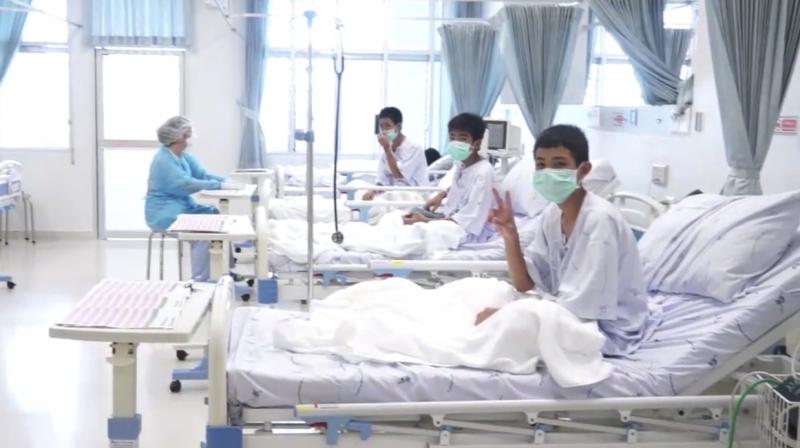 Chiang Rai: Video footage emerged Wednesday of several of the Thai boys rescued from a flooded cave recuperating in the hospital, as the stunning images of the youngsters being freed from their ordeal on stretchers was also released for the first time. The footage, initially posted on Facebook, was taken down by the Thai Navy SEAL.

The video shows several of the "Wild Boars" football team in a hospital, after being rescued from the Tham Luang cave in northern Thailand in a three-day operation which ended successfully on Tuesday.

Doctors have said they are in good physical and mental health -- a view backed up by the footage made available by the Thai government showing them behind quarantine glass in bed wearing smocks and facemasks, flashing peace signs and doing the traditional "wai" greeting.

They do not look shell-shocked or stunned despite a potentially harrowing 18 days inside a dank, dark cave followed by a risky rescue operation that was dubbed "Mission Impossible".

A former Thai Navy SEAL died while helping install oxygen tanks in preparation for the extraction.

Later Thai Navy SEALs posted clips from the painstaking rescue that was carried out in three phases ending Tuesday.

It showed divers in headlights and scuba-gear carrying out the boys on heavy-duty stretchers.

Experts have warned of possible long-term trauma from their experience in Tham Luang but medical officials have issued a drumbeat of mostly positive news about their condition, saying they are eating normal food and even asking for chocolate.