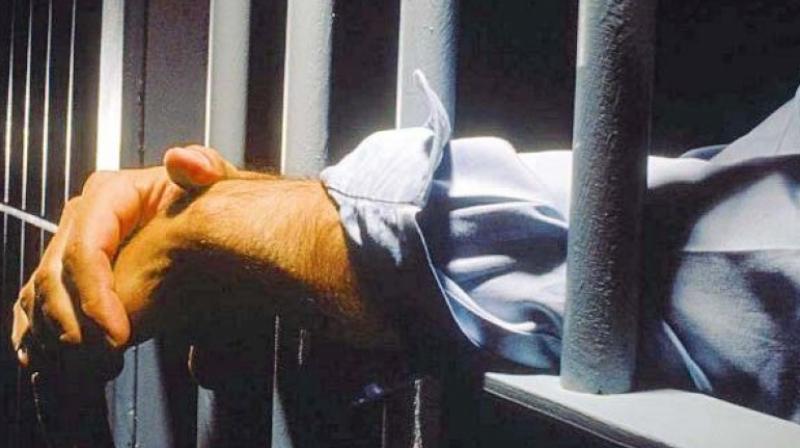 With a little over a year in his release in June last year after serving an 11-year, 12-stroke sentence for robbery with hurt, Soogumar, who works as a cleaner at a school, got into trouble with the law again. (Photo: Representational/File)

Singapore: An Indian-origin man has been sentenced to six months and four weeks in prison by a court here for assaulting and threatening law enforcement officials who summoned him for smoking in a prohibited area.

Ramasamy Soogumar, 59, on Friday admitted in a court to three offences for causing hurt to a police officer and a National Environment Agency (NEA) officer whose colleague had summoned him for smoking in an unauthorised area, The Straits Times reported.

With a little over a year in his release in June last year after serving an 11-year, 12-stroke sentence for robbery with hurt, Soogumar, who works as a cleaner at a school, got into trouble with the law again.

NEA enforcement officer Gugan Santhirasakaran, 24, and his colleague Salvin Kaur Mindar Singh, 23, saw the man smoking a cigarette while drinking beer in the void deck of Apartment Block 676, Hougang Avenue 8, at 7.05 PM (local time) on May 30 this year.

There was a "no smoking sign" 3-metre away from where has standing, it said. After identifying themselves, the officials wrote up a notice for Soogumar to attend court for committing the offence. He then hurled vulgarities in Tamil at Gugan, bumped into him using his chest and slapped him.

Sergeant Christian Tan Kai Jun, who was on a routine patrol in the area with another police official, then spotted the two NEA personnel calling for assistance. Deputy Public Prosecutor Sarah Shi said that when the two police officers tried to questioning Soogumar, the cleaner tried to leave.

He then repeatedly tried to confront Gugan in the presence of the police officers. They  stopped him and told him to sit. The Indian-origin man also tried to assault Staff Sergeant Lionel Tan Wei Ming's face but was stopped.

Undeterred, he then tried to move towards Gugan and when Sergeant Christian Tan tried to stop him, he slapped the police official's hand away. Soogumar threatened Gugan in Tamil by saying "You watch out. I will deal with you" and that he would "die" at his hands.

Pleading for leniency, the man's lawyer Harjeet Kaur told District Judge Imran Abdul Hamid that her client uttered the words because of him being in an inebriated state. He had been earlier sentenced to prison after conviction for disorderly behaviour, using abusive language and robbery with hurt.