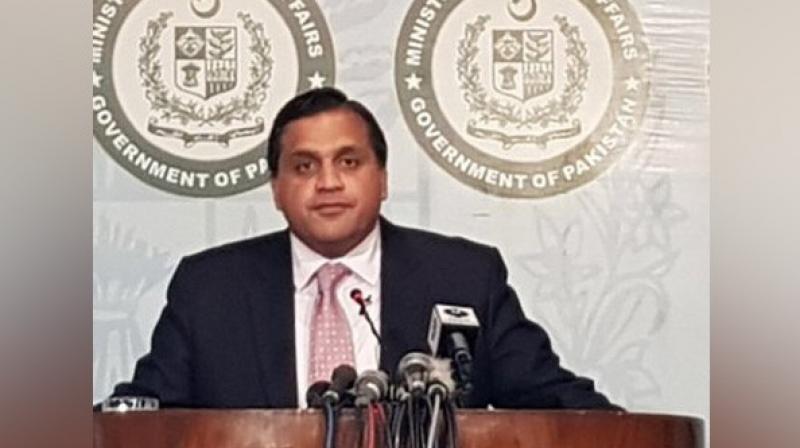 Earlier this month, India and Pakistan had failed to finalise an agreement on the Kartarpur corridor following differences over key issues including Islamabad's insistence on charge a fee for allowing pilgrims to visit Gurdwara Kartarpur Sahib. (Photo: ANI)

Islamabad: Pakistan on Thursday said that pilgrims will be charged USD 20 as service charge for visiting the Kartarpur Sahib Gurudwara.

Earlier this month, India and Pakistan had failed to finalise an agreement on the Kartarpur corridor following differences over key issues including Islamabad's insistence on charge a fee for allowing pilgrims to visit Gurdwara Kartarpur Sahib.

India is not agreeable to the proposal for charging pilgrims, said B C L Das, leader of the Indian delegation and Joint Secretary, Internal Security in the Home Ministry told a press conference after the third round of talks with Pakistan officials in Attari.

"Owing to certain differences on a few key issues, the agreement between India and Pakistan could not be finalised. Pakistan has insisted on charging a service fee for allowing Pilgrims to visit Gurdwara Kartarpur Sahib, which is not agreeable in the spirit of smooth and easy access through the corridor," he said.

He also added: "India has persisted that it should be free for the pilgrims who wish to visit Gurdwara Kartarpur Sahib. However, Pakistan has shown extreme inflexibility on the issue and they haven't accommodated our request."

"Pakistan has also shown its unwillingness to allow the presence of Indian Consular or Protocol officials at the Gurdwara premises. We also urged them to reconsider its position on the same," the official said.

During the meeting, both the sides also agreed on visa-free travel by Indian pilgrims to the Gurdwara Kartarpur Sahib in Pakistan using the corridor. Moreover, it will allow as many as 5,000 pilgrims to visit the Gurdwara every day.