Two US ships are taking part, with one each from the two Asian countries. 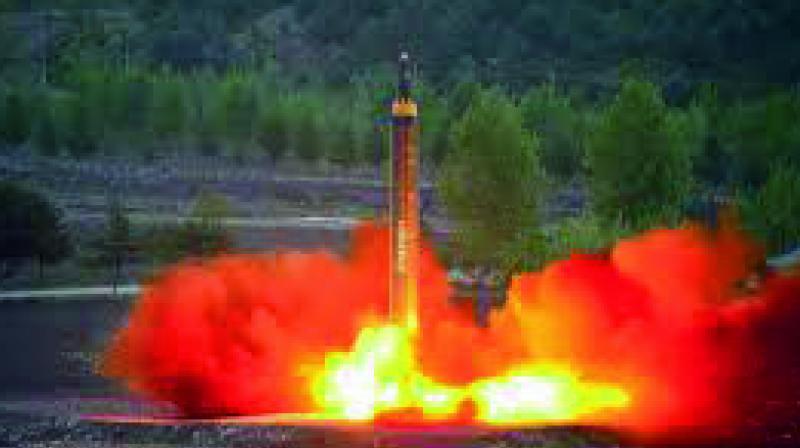 Both South Korea and Japan have security alliances with the US, although their own relationship is marred by disputes over history and territory.

Seoul: The US, South Korea and Japan carried out joint exercises on Monday to track missiles from North Korea, as China warned that such manoeuvres fuel tensions following nuclear-armed Pyongyang’s longest-range test launch to date.

The two-day exercise —the sixth since June last year — kicked off in waters near the Korean peninsula and Japan, Seoul’s defence ministry said.

“During the drill, Aegis warships from each country will simulate detecting and tracking down potential ballistic missiles from the North and sharing information,” it said in a statement.

Two US ships are taking part, with one each from the two Asian countries.

Both South Korea and Japan have security alliances with the US, although their own relationship is marred by disputes over history and territory.

Washington and Seoul staged their biggest-ever joint air drill last week in a show of force against the North, which is subject to multiple sets of UN sanctions over its ballistic missile and nuclear weapons programmes.

The coalition has urged others to take a tougher stance against Pyongyang but has so far found lukewarm reactions from the North’s main backers Beijing and Moscow.

China criticised the latest drills, which come as President Xi Jinping prepares to host South Korean counterpart Moon Jae-In this week for a summit aimed at soothing ties strained by the US deployment of an anti-missile system in the South.

“The situation is in a vicious cycle of provocation and confrontation. This is not conducive to regional peace and stability,” Chinese foreign ministry spokesman Lu Kang told a regular news briefing.

“If such a vicious cycle continues and leads to a very bad result, it serves no party’s interest,” Mr Lu said, echoing recent remarks by foreign minister Wang Yi.

“We believe that this issue should only be resolved through political and diplomatic means,” Gerasimov was quoted as saying by the Russian defence ministry.

Exercises around North Korea “destabilise the situation”, Gerasimov said, according to a Japanese defence ministry official.

Mr Onodera, however, stressed Japan’s position: “North Korea’s nuclear and missile development are significant threats against the international community. I want us to cooperate over this problem.”

Tension flared anew in the flashpoint peninsula after the November 29 launch of the Hwasong-15 ICBM, which the North claimed could deliver a “super-large heavy warhead” anywhere on the US mainland.