The two sides 'agreed at meeting to hold South-North summit in Pyongyang in September as planned', without giving a precise date. 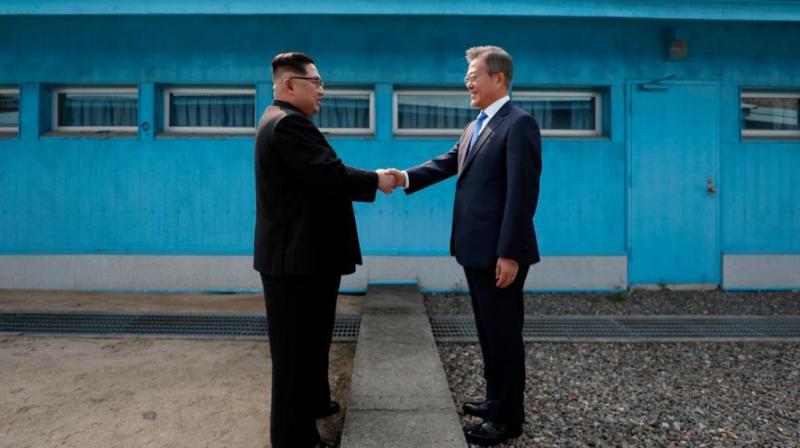 Seoul: North and South Korea agreed Monday to hold a summit in Pyongyang in September after high-level talks in the Demilitarized Zone that divides the peninsula.

The two sides “agreed at the meeting to hold a South-North summit in Pyongyang in September as planned”, the joint statement said, without giving a precise date.

A trip by the South’s President Moon Jae-in to the North’s capital would be the first such visit for more than a decade, as the diplomatic thaw on and around the peninsula builds.

But despite the rapprochement, international sanctions against the North for its nuclear and missile programmes have kept economic cooperation between the two Koreas from taking off, while little progress has been made on the key issue of Pyongyang’s denuclearisation.

“The September summit can be viewed as North Korea’s strategy to find a breakthrough in its stalled talks with the US,” said Asan Institute of Policy Studies analyst Go Myong-hyun.

At the historic first summit between Moon and the North’s leader Kim Jong Un in Panmunjom in April they agreed the South’s president would visit Pyongyang during the autumn.

The first South Korean president to go to the North’s capital was Kim Dae-jung, who met the current leader’s father and predecessor Kim Jong Il in 2000 and later won the Nobel Peace Prize, in part for his efforts at inter-Korean reconciliation.

But relations subsequently soured as the North accelerated its pursuit of nuclear weapons and the South elected conservative governments.

Monday’s high-level talks, taking place on the northern side of the truce village in the Demilitarized Zone, were proposed by the North last week as it lashed out at Washington for pushing ahead with sanctions.

Afterwards the North’s chief delegate Ri Son Gwon said the meeting had gone well and the date for the summit was “ready”, but they had not announced it as “reporting would be more fun when reporters are curious”.

Earlier he used a proverb describing a very intimate friend to refer to inter-Korean ties, saying: “We have opened an era where we are advancing hand in hand rather than standing in each other’s way.”

South Korea’s Unification Minister Cho Myoung-gyon, leading the delegation from Seoul, said in his opening statement it was important that the two Koreas keep “the same mind”, adding: “Any problem can be resolved with that mindset.”

The rapid rapprochement between the two neighbours began this year ahead of the Winter Olympics in the South and paved the way for a landmark meeting between Kim and US President Donald Trump in Singapore in June.

Cross-border exchanges between the two Koreas have significantly increased since then, with the neighbours planning to hold reunions for war-separated families next week for the first time in three years.

But although Trump touted his summit with Kim as a historic breakthrough, the nuclear-armed North has since criticised Washington for its “gangster-like” demands of complete, verifiable and irreversible disarmament.

Meanwhile the US has urged the international community to maintain tough sanctions on the isolated regime -- Seoul has caught three South Korean firms importing coal and iron from the North last year in violation of the measures.

Experts say Moon could try to act as a mediator between the US and North Korea, having salvaged the Singapore meeting when Trump abruptly cancelled it.

“They are trying to send a message externally that the North-South dialogue momentum has been established and that it will be maintained regardless of the outcome of US-North Korea talks,” said analyst Go.

“Whether that is true is in doubt but they are trying to indirectly pressure the US, especially on sanctions, by showing an improvement in North-South ties and that peace has been established between them.”

Moon and Kim agreed at their summit in April to officially declare an end to the 1950-53 Korean War, which concluded with an armistice instead of a peace treaty, by the end of the year.

But Harry Harris, the US ambassador to South Korea, said Monday it was too soon for such a declaration, Yonhap reported.