For Thais, a year of mourning for a much-loved King will end today

On the evening of October 5, I went to the Grand Palace for the last day for mourners to bid farewell to the King. 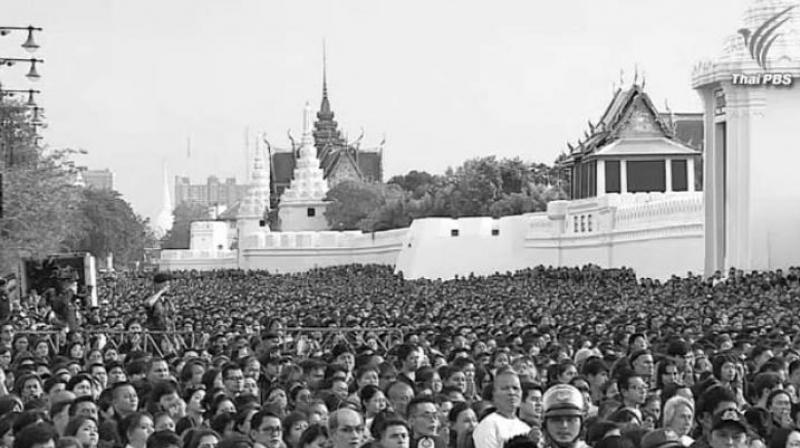 Bangkok: Friday, October 13, will mark the one-year anniversary of the passing of Bhumibol Adulyadej, Rama IX of the Chakri Dynasty, King of Thailand for 70 years and seven months. In this year of mourning King Bhumibol’s body has lain in state in the Dusit Maha Prasat Throne Hall of Bangkok’s Grand Palace, and 13 million Thais, about one in six in a nation of 68 million, have paid their respects to the Golden Urn.

On the evening of October 5, I went to the Grand Palace for the last day for mourners to bid farewell to the King. Sanam Lunang, the great field adjacent to the Grand Palace, has served as the waiting area where multitudes have been given food and drink, medical assistance, even clothing rentals to adhere to the traditional sartorial requirements for the occasion. Staffed by volunteers, medics and military, the atmosphere was gracious and heartfelt. It was a full moon at the end of the rainy season — Thailand has three seasons: the hot, dry and wet — and Bangkok is daily drenched by cloudbursts. But on that Purnima night, Lord Indra withheld the rain and a pearl white moon rose above the golden spires of the Grand Palace, as citizens waited in patient queues until 3 am. One grandmother had come 315 times to express her love for her King. “I wanted to be close to my King one more time,” said an engineer from Bangkok, lingering at Sanam Luang after a last pilgrimage to the palace. “For 70 years, we never knew life without him. From my earliest childhood, every night we watched him on television, always working, always helping us. I can’t quite believe that he isn’t here.”

In this year of mourning, King Bhumibol’s presence has been ubiquitous. Images of the beloved monarch are seen everywhere, adorned with black and white banners and floral offerings. His hit songs, which he played live on Thai radio every Friday in the early years of his reign, float through the air. And for an entire year many Thai citizens have worn the mourning colours of black and white, many with pins and emblems with the numeral 9.

Indeed, for 70 years, Rama IX was a constant presence in the lives of his people, as he was the first Thai monarch to visit every corner of the kingdom. Bangkok is filled with exhibitions with paintings and photographs of King Bhumibol striding through fields and jungles with his pencils, maps and cameras.  Helaunched thousands of royal projects in infrastructure, healthcare, education, art and commerce, which made Thailand the most stable and prosperous nation in Southeast Asia. King Bhumibol is known as the father of Thai radio, from childhood he took a keen interest in telecommunications and on his visits to remote regions of Thailand he always carried a walkie-talkie, to be alerted to crises and natural disasters. King Bhumibol also created Thailand’s modern university system and personally bestowed the degrees on every single graduate; many visitors to the Grand Palace brought with them treasured photographs of receiving their diplomas from the King’s hand.

Throughout this month, jumbotrons, video screens in the sky train and Thai television are screening archival footage of the King’s life, which show the astonishing range of his talents and achievements. There are innumerable programmes about his innovations in agriculture and technology, and of course, his gifts as a composer and musician. There are two iconic pop culture images of the King — meeting Elvis Presley in Hollywood, and jamming with Benny Goodman and Gene Krupa in New York City. When Benny Goodman and his orchestra performed in Thailand in 1956, Mr Goodman famously observed: “That King of Thailand is the coolest cat in the world.”

Watching the film footage of King Bhumibol’s life is witnessing the arc of the post-Second World War order. His state visits throughout the world were triumphs; fluent in English, French and German, his protocol was impeccable, and his wife, the exquisitely poised Queen Sirikit, ruled the international best-dressed list for years. But Thailand was under siege from a violent Communist insurgency that lasted from 1963 to 1983, and when Saigon fell to the Vietcong in 1975, King Bhumibol vowed that he would never leave his people. The ultimate proof of his fidelity is that he never did, save for a trip to the Laotian border in 1994 where he supervised the opening of a bridge.

As the grounds of Sanam Luang are cleared and swept to prepare for the ceremonies leading up the royal cremation on October 26, many feel a looming sense of finality. The Bangkok Post wrote: “The reign began when we had so little. It ended with us having so much more.” On the last night when mourners could come to the Grand Palace, a retired civil servant said: “I came over 30 times to pay respects to His Majesty. This last time was the hardest. We all want to keep serving him. We can never repay him for everything he gave to us.”