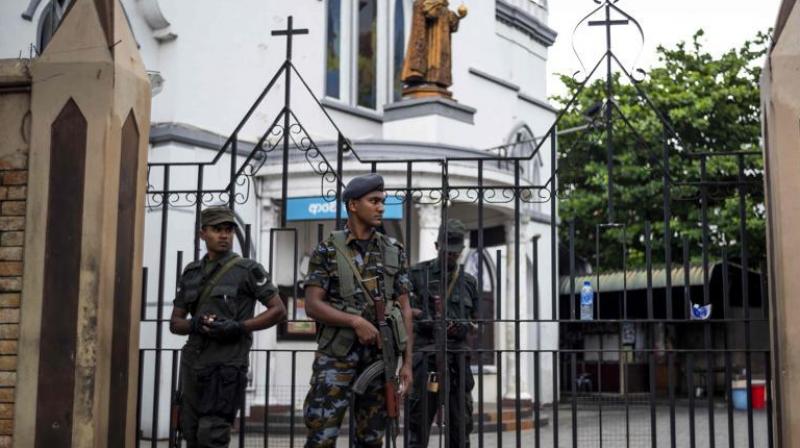 The 45-year-old man died shortly after admission to a hospital in Puttalam district during the rioting which began Sunday in the area, a police official told AFP. (Photo: File)

Colombo: Mobs slashed to death a Sri Lankan Muslim man despite a nationwide curfew imposed Monday night after anti-Muslim riots spread to three districts north of the capital in a violent backlash against Easter suicide bombings.

The 45-year-old man died shortly after admission to a hospital in Puttalam district during the rioting which began Sunday in the area, a police official told AFP.

"Mobs had attacked him with sharp weapons at his carpentry workshop," the official said. "This is the first death from the riots."

"At several places in the North-Western Province these groups created trouble, damaged property," Wickremesinghe said in a televised address to the nation.

"Police and security forces have contained the situation, but these (unidentified) groups are still trying to create trouble."

Sri Lanka on Monday temporarily blocked some social media networks and messaging apps, including Facebook and WhatsApp, after attacks on mosques and Muslim-owned businesses in the worst unrest since Easter bombings by Islamist militants.

In a separate TV address, Police Chief Chandana Wickramaratne warned police will take stern action against rioters, and constables have been issued orders to use maximum force.

Residents in the North-Western Province were ordered to stay indoors after Christian-led mobs torched dozens of Muslim-owned shops, vehicles and mosques on Sunday and Monday.

The attacks came during the Muslim holy fasting month of Ramadan.

Later the curfew was extended to cover the entire country of 21 million people.

Police said there were sporadic incidents of mobs throwing stones and torching shops, motorcycles and cars owned by Muslims. In the town of Hettipola, at least three shops were torched.

In the town of Minuwangoda, just north of Colombo, a Muslim-owned hotel and a mosque were attacked by stone-hurling mobs armed with sticks.

"Several shops have been attacked," a senior police officer told AFP. "When mobs tried to attack mosques, we fired in the air and used tear gas to disperse them."

The officer added that "there are people trying to make political capital out of this situation."

Platforms were similarly blocked after the Easter attacks.

The Prime Minister urged the public not to believe rumours and warned that civil unrest will stretch the already thinly deployed security forces.

"I appeal to all citizens to remain calm and not be swayed by false information," Wickremesinghe said on Twitter, which was not targeted in the social media blockade.

A state of emergency has been in place since the bombings – which the Islamic State group claims to have helped – and security forces have been given sweeping powers to detain suspects.

The latest wave of unrest started when a mob targeted Muslim-owned shops in the town of Chilaw, 80 kilometres (50 miles) north of Colombo on Sunday in anger at a Facebook post by a shopkeeper.

"Don't laugh more, 1 day u will cry," he wrote, which local Christians took to be a warning of an impending attack.

The group smashed the man's shop and vandalised a nearby mosque prompting security forces to fire in the air to disperse the crowd, but the violence spread.

There had already been clashes last week between Christians and Muslims in Negombo, the town north of Colombo that was targeted by the suicide attackers.

The main body of Islamic clerics, the All Ceylon Jamiyyathul Ulama (ACJU), said there was increased suspicion of Muslims after the Easter Sunday killings.

"We call upon the members of the Muslim communities to be more patient and guard your actions and avoid unnecessary postings or hosting on social media," the ACJU said.

The latest unrest came as Catholic churches resumed public on Sunday masses for the first time since the bombings.

Dozens of people have been detained since the Easter attacks, and with security heightened students are only allowed into schools after checks for explosives.

But attendance has been extremely low, according to education authorities.

Muslims make up around 10 per cent of Buddhist-majority Sri Lanka's population and Christians about 7.6 per cent.