Sharif said that CPEC is aimed at integrating development and commerce of various regions across Asia and Europe. 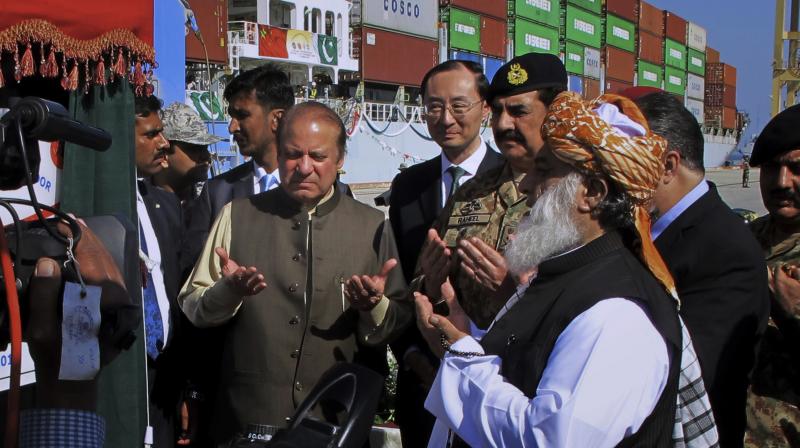 The port is now operational for trade through the western route of CPEC with a Chinese ship exporting goods to the Middle East and Africa sailing off.

The first convoy of Chinese trucks carrying goods for sale abroad has arrived in Pakistan amid tight security using a road linking Gwadar to China’s north-western Xinjiang region, Pakistan said in a statement.

“I want to make it clear that CPEC is not only for a particular province but for entire Pakistan. And, enemy of CPEC is enemy of Pakistan,” Sharif said at the inauguration. Pakistan will leave no stone unturned to materialise the CPEC in time, he added.

“It is a historic day marking the materialising of the vision and idea of ‘one belt one road’.”

Sharif said that CPEC is aimed at integrating development and commerce of various regions across Asia and Europe.

The port is located on the Arabian Sea and occupies a strategic location between south Asia, central Asia and the Middle East. The port is also located at the mouth of the Persian Gulf, just outside the Straits of Hormuz.

Chinese ambassador to Pakistan Sun Weidong said that the day was very significant for CPEC and China-Pakistan relations adding that for the first time a convoy successfully passed through the western part of Pakistan from north to the South.

“Besides, Gwadar Port is exporting containers to overseas destinations for the first time. It proves that the port has the resources, design and handing capacity.”

“The trade convoy was an example of the spirit of mutual cooperation, joint construction and mutual benefit and win-win situation for both the countries,” Sun said.