Masks off, mortarboards on: Wuhan sheds Covid for mass graduation 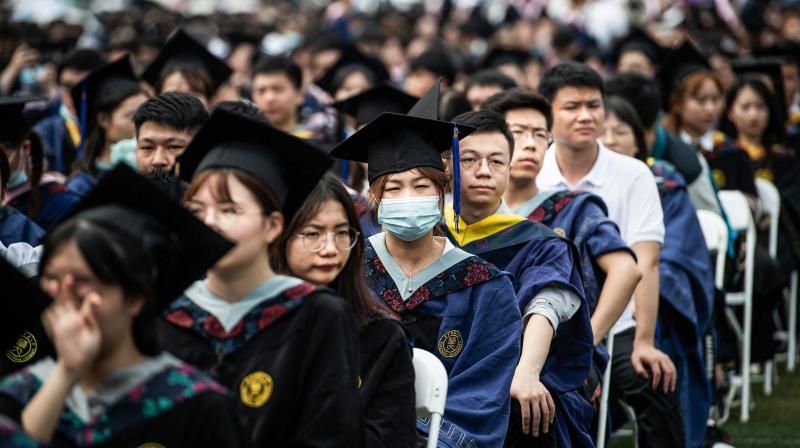 This photo taken on June 13, 2021 shows nearly 9000 graduates, including more than 2000 students who could not attand the graduation ceremony last year due to the Covid-19 coronavirus outbreak, attanding a graduation ceremony at Central China Normal University in Wuhan, in China's central Hubei province. (Photo by STR / AFP) / China OUT

Beijing: A huge red banner welcomed nearly 9,000 students in Wuhan for a massive graduation ceremony over a year after the city was battered by the first global outbreak of Covid-19.

Students in navy gowns and mortarboards sat in crowded rows, without social distancing or face masks, beneath the sign that read: "Welcoming the graduates of 2020 back home. We wish you all a great future."

Covid-19 first emerged in late 2019 in Wuhan, capital of central China's Hubei province, sending the city of 11 million into one of the world's strictest lockdowns.

Restrictions were not eased until April when the city started to re-open after 76 days closed off, although schools remained shut for longer.

The city held limited graduation ceremonies last year, with Wuhan University hosting a mostly-online event in June last year, with the students and teachers who did attend all in masks

More than 2,200 students at Sunday's ceremony were graduates who could not attend their graduation last year due to tight virus restrictions.

There were 20 new cases on Tuesday, including 18 imported from overseas and two in a local outbreak in southern Guangdong province.

There have been 4,636 deaths officially reported, the majority in Wuhan.

Quoting a line of ancient Chinese poetry, the banner offered students advice for the future: "The ocean is boundless for leaping fish."