Large parts of Marawi have been left resembling devastated cities in war-torn Syria and Iraq. 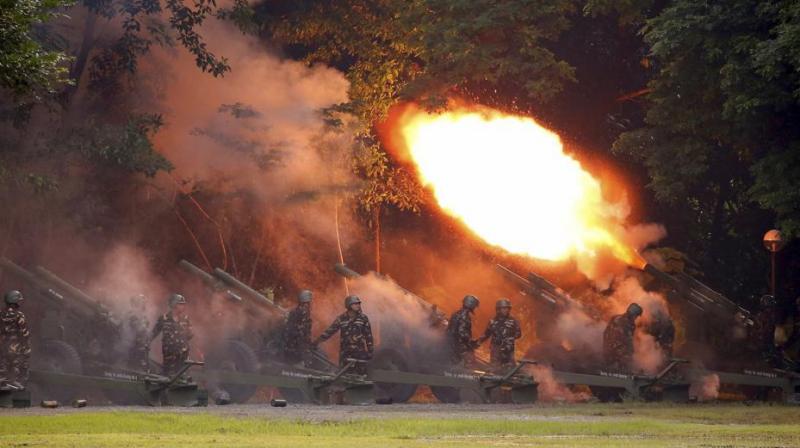 The army previously set a target of Sunday to end the fighting in Marawi, which it said has killed more than 1,000 people. (Photo: AP)

Marawi (Philippines): Philippine troops Sunday bombed militants loyal to the Islamic State group who have held out for over four months in a southern city and the military said the conflict would be over “very soon”.

The army previously set a target of Sunday to end the fighting in Marawi, which it said has killed more than 1,000 people. Troops have missed previous deadlines to flush out the militants whom authorities said intended to establish a local IS caliphate.

On Sunday FA-50 fighter jets flew over Marawi as soldiers fought the militants house-to-house in an area which has now shrunk to about five acres, a military spokesperson said.

“We are hoping that we will end this Marawi siege very soon,” Colonel Romeo Brawner, deputy commander of the task force battling the militants, told reporters.

Pro-IS gunmen occupied parts of Marawi, the Islamic capital of the mainly Catholic Philippines, on May 23.

Since then 822 militants, 162 government forces and 47 civilians have been killed, Brawner said.

The insurgents have withstood a relentless US-backed bombing campaign and intense ground battles with troops that have left large parts of Marawi resembling devastated cities in war-torn Syria and Iraq.

Military commanders last week set a target of October 15 to end the fighting and President Rodrigo Duterte on Friday said the battle was “almost over”.

Twenty soldiers were wounded on Saturday in a sign troops were pushing hard to end the battle, Brawner said.

He said 40 militants remained in the conflict area including leaders Isnilon Hapilon, who is on America’s list of most wanted terrorists with a $5 million bounty, and Omarkhayam Maute, whose group had pledged allegiance to IS.

There were also 100 civilians in the zone including hostages and families of the militants, he added.

“Women and children are now forced to fight together with the Maute-ISIS fighters. These are desperate measures the Maute-ISIS are doing. This is their last defensive stand,” Brawner said, using another acronym for IS.

Duterte on Thursday warned against celebrating the eventual liberation of Marawi, citing the deaths and devastation there.

“When we leave Marawi, we go quietly. We do not want to show any kind of celebration or happiness,” he said.