Hong Kong's Chief Executive Carrie Lam made a reversal on Saturday and halted the extradition law, only days after voicing strong support. 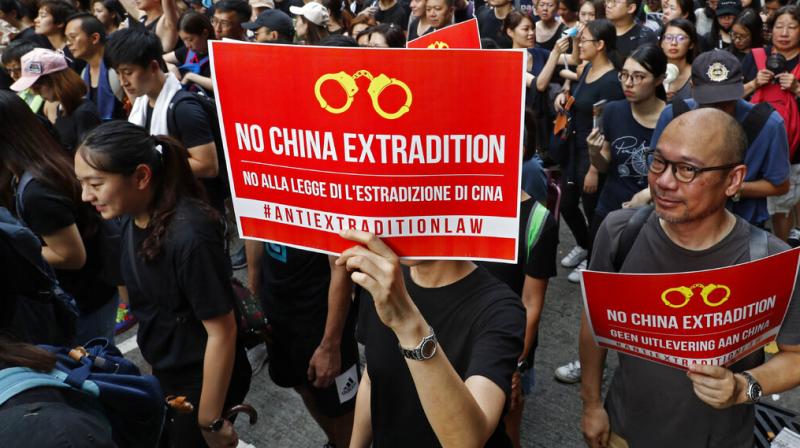 ‘We want the government to condemn this police violence. We don't want Hong Kong to be ruled by fear,’ activist Lee Cheuk Yan was quoted as saying. (Photo: AP)

Hong Kong: Thousands of protestors took to streets on Sunday demanding the permanent scrapping of the controversial bill that threatens to send criminal suspects to mainland China for prosecution, a day after the city government suspended it indefinitely.

Hong Kong's Chief Executive Carrie Lam made a stunning reversal on Saturday and halted the controversial amendment from becoming a law, only days after vowing to push ahead with it. But, in addition to the scrapping, the protestors also called for Lam's resignation for pushing ahead with the law, Al Jazeera reported.

Former Legislative Councillor and activist Lee Cheuk Yan told reporters that the now-dormant law "can be revived by Carrie Lam at any time", adding that it was important to continue opposing the government on the issue, particularly after the violence and arrests of Wednesday.

"We want the government to condemn this police violence. We don't want Hong Kong to be ruled by fear," the activist was quoted as saying.

Large numbers of protesters began to gather in the city's Victoria Park just after midday Sunday, donning black and wearing white ribbons on their chests.

Many of them carried bunches of white flowers to honour a man who died after falling from the terrace of a luxury mall in the business district of Admiralty on Saturday, shortly after Lam's announcement.

Lam, the top official in Hong Kong, on Saturday said that the passage of the bill would be suspended and a second reading due to take place this month cancelled. There is no timeline for discussions around the bill to resume, Lam said, and she indicated it likely will not pass this year, CNN reported.

But for the protesters, a suspension is not enough. They fear the bill could be used to extradite residents to mainland China for political or inadvertent business offences and are pushing for it to be shelved completely.

The crowd comprising mostly young men is expected to march from the city's Victoria Park through the downtown area to Tim Mei Avenue in Admiralty.

Sunday's protest follows violent clashes between police and protesters Wednesday, after tens of thousands of mostly young people surrounded the city's government headquarters, forcing legislators to postpone a debate on the bill.

Protest organizers are calling for authorities to drop charges against the 11 people arrested during protests Wednesday, amid widespread criticism of police tactics.