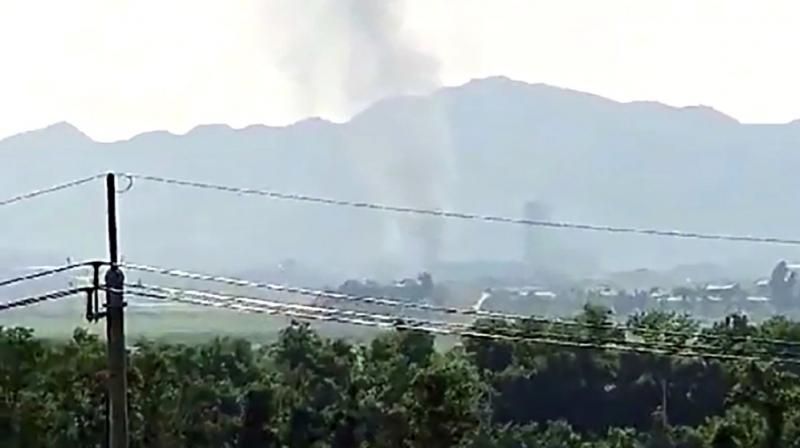 SEOUL: North Korea has confirmed it destroyed an inter-Korean liaison office on Tuesday, as it continued to dial up pressure against rival South Korea amid stalled nuclear negotiations with the Trump administration.

Pyongyang’s official Korean Central News Agency said the North destroyed the office to correspond with the “mindset of the enraged people to surely force human scum and those, who have sheltered the scum, to pay dearly for their crimes,” apparently referring to North Korean defectors who for years have floated anti-Pyongyang leaflets across the border.

The news agency did not detail how the destruction of the office was carried out, but said it was “tragically ruined with a terrific explosion.”

The North, which has a long track record of pressuring South Korea when it fails to extract concessions from the United States, has repeatedly bashed the South in recent weeks over declining bilateral relations and its inability to stop leafleting by defectors and activists.

The detonation of the office came hours after the North’s military threatened to move back into zones that were demilitarized under inter-Korean peace agreements, which experts say could create security threats for the South along the land and sea borders.

Analysts say Pyongyang may be seeking to manufacture a crisis to increase pressure on Seoul while nuclear negotiations with Washington are at a standstill.

The liaison office was opened in September 2018, days before the South's President Moon Jae-in flew to Pyongyang for his third summit with Kim, and around 20 officials from each side were stationed at the office during subsequent months.

But inter-Korean relations soured following the collapse of the Hanoi summit between Kim and US President Donald Trump in February last year over sanctions relief and what the North would be willing to give up in return.

Operations at the office were suspended in January because of the coronavirus pandemic.

And since early June, North Korea has issued a series of vitriolic condemnations of the South over activists sending anti-Pyongyang leaflets over the border -- something defectors do on a regular basis.