Since the value of Lebanon's currency began plummeting and banks started imposing draconian restrictions on withdrawals. 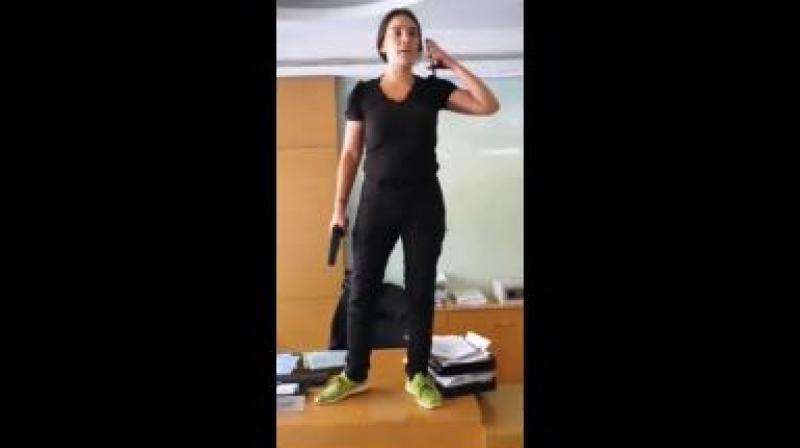 Story Type Required Source Required Byline Optional No Photo Title Required 85 Characters Remaining URL(Alias) Required 27 Characters Remaining wave-of-lebanon-bank-heists-to-seize-back-frozen-savings Same as Title? Strap Required Maximum 150 Characters Sali Hafiz streamed a live video of her raid, in which she could be heard yelling at employees to release a sum of money while entrances to the bank were sealed. (Photo: Twitter)

GHAZIYEH:  A man held up a Lebanese bank to withdraw his frozen savings Friday, the latest in a string of "depositor heists" in the crisis-hit country that have garnered wide public support.

Lebanon has been mired in an economic crisis for more than two years, since the value of its currency began plummeting and banks started imposing draconian restrictions on withdrawals.

The holdup of a Beirut bank on Wednesday by an activist who filmed herself using a toy gun appears to have sparked a series of copycat raids by people fed up at being unable to withdraw their savings.

There were another three such incidents in the country on Friday.

In one of them, a man carrying a gun and jerrycan of fuel demanded staff at a branch of the Byblos bank in the southern town of Ghaziyeh hand over his deposit.

Accompanied by his son, the man in his 50s threatened bank staff with the gun, which a Lebanese television channel said may have been a toy, before making his demand.

"He emptied a jerrycan of fuel on the floor," a bank security guard told an AFP correspondent.

The man walked away with about $19,000 in cash but turned himself in to police moments later as a crowd formed in front of the bank to support him.

Not 'a bank robber'

A few hours later in the Beirut neighbourhood of Tariq al-Jdideh, a tense security situation developed around a branch of Blom Bank, although details were unclear.

Witnesses outside the bank said an indebted shop-owner had demanded access to his trapped savings.

He was locked inside the bank together with police officers, the witnesses told AFP at the scene, but was thought to be unarmed.

Another man armed with a hunting rifle stormed a bank in Beirut's Ramlet el-Baida neighbourhood on Friday, witnesses told an AFP photographer at the scene.

The spate of heists comes two days after a young activist stormed a central Beirut bank with fuel and plastic gun to demand the deposits of her sister, who needed to pay for cancer treatment.

The woman identified as Sali Hafiz made off with around $13,000 and became an instant hero on social media with a picture of her standing on a desk inside the bank during the raid going viral on social media.

"She had every right to do this. I would do the same if I was as brave as her," said Carla Chehab, a 28-year-old Beirut resident.

"And don't let anyone call her a bank robber. The thieves are the banks, the government and all rich people protecting them," she added.

Also on Wednesday, a man held up a bank in the city of Aley northeast of Beirut, the official National News Agency reported.

As the bank heists snowballed on Friday, the Lebanese interior minister called for an emergency meeting in the afternoon.

The raids are seen as mostly acts of desperation by Lebanese depositors who do not have criminal records and are trying to settle bills, drawing wide sympathy from the general public.

Last month, a man received widespread sympathy after he stormed a Beirut bank with a rifle and held employees and customers hostage for hours, to demand some of his $200,000 in frozen savings to pay hospital bills for his sick father.

He was detained but swiftly released and was present Friday outside the bank in Tariq al-Jdideh to express his support.

Lebanon has been battered by one of its worst-ever economic crises.

Its currency has lost more than 90 percent of its value on the black market, while poverty and unemployment have soared.

Banks have been widely accused of operating like a cartel and of spiriting large amounts out of the country for senior Lebanese officials at a time when foreign transfers were already blocked for ordinary citizens.

"We call on every depositor who refuses injustice, oppression and theft to support any depositor who asks for what is rightfully theirs," association member Tala Khalil told AFP.

According to local media, the bankers association called an emergency meeting to defuse the risk of further attacks by deciding a three-day nationwide closure next week.