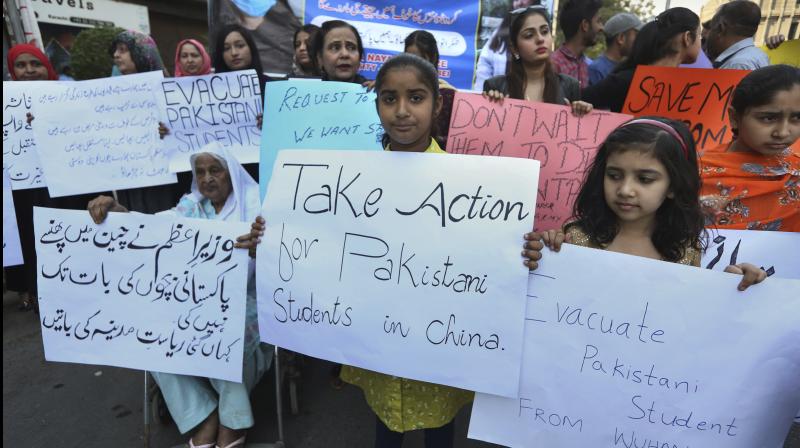 Family members of Pakistani students studying in Wuhan, China, hold a demonstration calling for the evacuation of their relatives after the Chinese city was badly hit by the coronavirus, in Karachi, Pakistan AP photo

Pakistan’s government has so far ruled out evacuating the more than 1,000 Pakistani students in the province, home to the city of Wuhan, at the centre of the coronavirus outbreak.

State Health Minister Zafar Mirza said on Twitter on Friday that he and other ministers would hold a meeting for parents in Islamabad on Wednesday and that his government was working with Chinese authorities to ensure students were taken care of.

But many students and their families have expressed growing frustration as the death toll in China mounts, pointing to other countries, including neighbouring India and Bangladesh, evacuating their citizens.

“For God’s sake, we request from the government representatives please bring back our children, please listen to a mother’s grievance,” one protester, who declined to give her name, told media while bursting into tears.

The protesters chanted “bring back our children” and held up banners with the same message.

Earlier in the week dozens of families in Lahore held a similar protest outside the Chinese consulate.

A spokesman for Mirza did not immediately respond to a Reuters request for further comment.

He said on Twitter six Pakistani students in China confirmed to have had the virus had fully recovered and one was still receiving treatment.

Nonetheless, students in touch with Reuters from China over the past days said they wanted to leave.

Mir Hassan, a student whose father died of a heart ailment this month while he was stuck in Wuhan, said he had been told by Pakistani officials he would not be evacuated despite wanting to return home to his grieving mother.

“She is also begging me to come back home. Unfortunately, I haven’t any idea when I will go back home and see my mom,” he told Reuters.

Sahil Hassan, a PhD student in Wuhan, said he was finding it hard to receive scholarship payments, leaving them unable to afford food and bottled water from their university’s food delivery service while in lock down.