At least 77 people have been killed by flash floods in Indonesia's eastern Papua province. 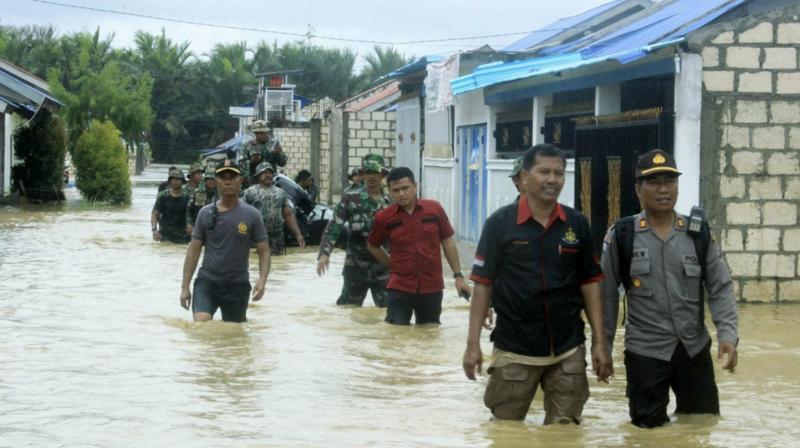 Jakarta: At least 77 people have been killed by flash floods in Indonesia's eastern Papua province, an official said Sunday, as rescuers raced to find more victims of the disaster.

The floods in Sentani, near the provincial capital of Jayapura, were triggered by torrential rain and subsequent landslides on Saturday, and also left dozens injured. Dozens of homes were damaged by floodwaters, national disaster agency spokesman Sutopo Purwo Nugroho said.

"The number of casualties and impact of the disaster will likely increase as search and rescue teams are still trying to reach other affected areas," he added. "The floods were likely caused by a landslide."

The waters had receded but officials were still trying to evacuate people. "The joint search and rescue teams are still doing evacuations and not all affected areas have been reached because of fallen trees, rocks, mud and other material," Nugroho said.

Video footage from the scene showed rescuers administering oxygen to a victim who appeared trapped beneath a fallen tree. Uprooted trees and other debris were strewn across muddy roads, while at Jayapura's small airport a propeller plane lay partly crushed on a runway.

Papua shares a border with independent Papua New Guinea on an island just north of Australia. Flooding is not uncommon in Indonesia, especially during the rainy season which runs from October to April.

In January, floods and landslides killed at least 70 people on Sulawesi island, while earlier this month hundreds in West Java province were forced to evacuate when torrential rains triggered severe flooding.

The Southeast Asian archipelago of some 17,000 islands is one of the most disaster-prone nations on Earth, straddling the Pacific Ring of Fire, where tectonic plates collide. Earthquakes and volcanic eruptions are common.

In December, the western part of Java island was slammed by a deadly volcano-triggered tsunami that killed about 400 people. Also last year, the city of Palu in Sulawesi was rocked by a quake-tsunami disaster that killed thousands, while hundreds of others died in a series of quakes that hit the holiday island of Lombok, next to Bali.