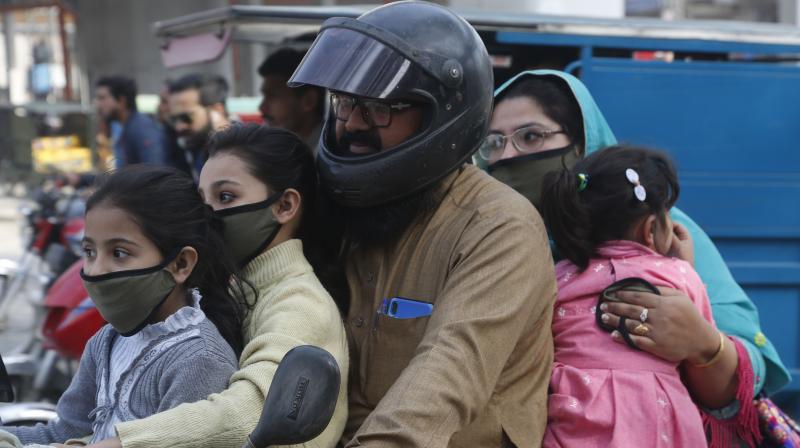 A Pakistani family wears face masks to help prevent exposure to the new coronavirus as they travel on a motorbike in Lahore, Pakistan. AP Photo

Islamabad: The total number of coronavirus cases in Pakistan's Sindh province, bordering Iran, on Tuesday rose to 155, bringing the country's tally of COVID-19 infections to 189, an official said.

"So far 119 patients in Sukkur have tested positive while 115 tested negative. In addition to this, 36 tested positive in the province  34 under treatment and two cured," Spokesperson for the Sindh government Barrister Murtaza Wahab on Tuesday tweeted.

Provincial authorities on Tuesday confirmed five new cases of the novel coronavirus in the Sindh province, pushing the country's tally of confirmed COVID-19 cases to 189, Wahab was quoted as saying by the Express Tribune.

The number of quarantined pilgrims in Taftan where over 9,000, who have returned from Iran and have been quarantined by the Balochistan government in a 'tent city', the report added.

After completing the 14-day incubation period, the pilgrims were allowed to travel back to their cities. However, Sindh and Khyber Pakhtunkhwa sent the pilgrims to isolation facilities in Sukkur and Dera Ismail Khan and tested them before allowing further travel.

Sindh Chief Minister Murad Ali Shah accused in a press conference that pilgrims were not properly isolated at Taftan and were kept together.

Meanwhile, government is taking steps to contain the pandemic as authorities in Punjab province converted all public sector universities' hostels into quarantine centres as an immediate arrangement.

Officials said that universities were informed in the province to clean all hostels and shift the belongings of students, if there were any, to store rooms after properly tagging them for identity.

The Prime Minister's Advisor on Health Dr Zafar Mirza said that all educational institutions have been closed and their staff stopped from attending the institutions.

The virus that first emerged in China's Wuhan city in the Hubei province in December last year has spread to 155 countries, infected 182,405 people and has claimed 7,154 lives, according to the Johns Hopkins Coronavirus tracker.

China remains the hardest-hit with 80,881 infections and 3,226 deaths by the end of Monday. After China, Italy and Iran are the two worst-affected countries.

Among other things, it decided to close down the western border with Afghanistan and Iran. It also ordered the closure of all education institutions in Pakistan till April 5 in view of the virus outbreak.