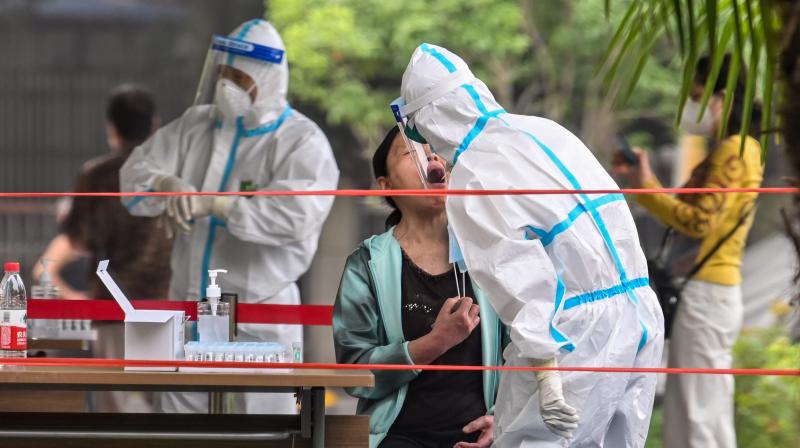 A medical worker takes a swab sample from a man to be tested for the COVID-19 novel coronavirus in a neighborhood in Wuhan. (AFP)

Beijing: China still faces an enormous challenge of a potential second wave of COVID-19 infections, with a lack of immunity among a major threat, a top medical advisor of the country has warned.

Doctor Zhong Nanshan, senior medical advisor of the Chinese government on Saturday was quoted in an exclusive CNN report as saying: "The majority of ... Chinese at the moment are still susceptible to the Covid-19 infection, because (of) a lack of immunity."

"We are facing (a) big challenge, it's not better than the foreign countries I think at the moment."

Dr Zhong is a well-known figure in China who in the year 2003 was known as the "SARS hero" for fighting the severe acute respiratory syndrome epidemic. Even now, Zhong's contribution is considered pivotal in the country's coronavirus response.

Moreover, it was Dr Zhong who confirmed in January this year on state broadcaster CCTV that the COVID-19 can be transmitted between humans.

"At the very beginning they kept silent, and then I said probably we have (a larger) number of people being infected," Zhong said. "I didn't believe that result, so I (kept) asking and then, you have to give me the real number."

Coronavirus, which was first detected in the Chinese city of Wuhan has so far reported 82,000 COVID-19 cases in the country, with 4,633 fatalities, according to data from the country's National Health Commission (NHC).

The Chinese mainland reported six new imported cases of the coronavirus disease on Saturday, which brought the total number of imported cases to 1,698.

Earlier in the day, a health official stressed the need to improve further testing capabilities in China. According to the Xinhua news agency, China is able to conduct 1.5 million nucleic acid tests for COVID-19 infections every day.

The National Health Commission has called on all qualified and registered medical institutions across the country to conduct nucleic acid testing since the end of January to deal with the rapid growth of COVID-19 cases, said Guo Yanhong, an official with the commission.

The next step is to step up the building and management of laboratories, biosafety management and the training of medical personnel, the official added.