Taiwan to step up efforts to prevent Chinese spies settling 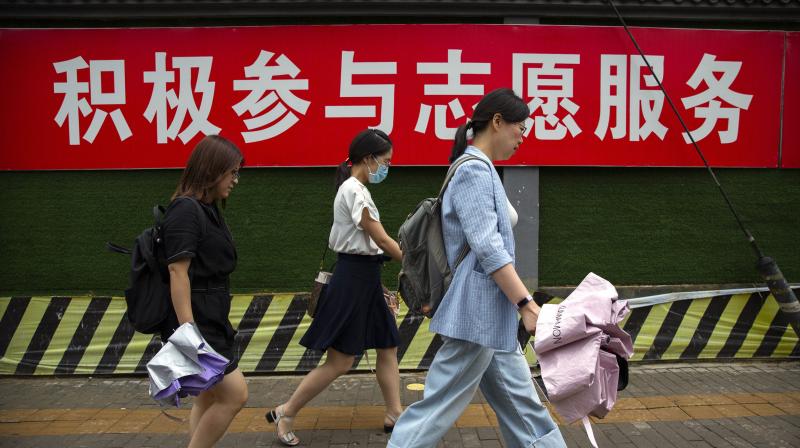 People wearing face masks to protect against the coronavirus walk past a propaganda banner reading "Actively participate in volunteer service" in Beijing. (AP)

Taipei: Taiwan will step up scrutiny of mainland Chinese citizens who are residents of Hong Kong and seek to move to the island to ensure they do not engage in spying or other illegal acts, the government said on Monday.

Taiwan has offered to welcome Hong Kong people who wish to leave the turmoil-hit Chinese-run city for the democratic island, especially after Beijing imposed a new national security law on the former British colony, though Taiwan officials have expressed concern some who come may be spies.

The new measures are aimed at “strengthening the management” of people from mainland China, Hong Kong and Macau who have residence in either of the two Chinese-ruled cities and seek to settle in Taiwan, the island’s Mainland Affairs Council said.

It aims to prevent them from “carrying out infiltration, united front, disturbance or spying activities”, the council said.

United front refers to the Chinese Communist Party’s United Front Work Department, which is in charge of co-opting overseas Chinese and non-communists.

The order targets Hong Kong and Macau residents who are originally from mainland China, or who are current or previous party, government or military officials, the council added.

Applications from such people will be subject to cross-department review to help protect national security, it said.

Communist China claims capitalist Taiwan as its “sacred” territory and has never renounced the use of force to bring it under Beijing’s control, though most people in Taiwan have shown no interest in being ruled by China.

Taiwan and China have extensive business and people-to-people exchanges but remain deeply suspicious of each other.

Taiwan in July opened an office to help Hong Kong people who wish to move to the island.

Taiwan has long been wary of Chinese efforts to influence its democracy through illicit funding of politicians and the media and other methods like spying.

Beijing denounced the move, saying Taiwan was trying to stir up enmity towards China.