Amid US pressure; China-Iran foreign ministers meet to discuss security

Iran wishes to cooperate with China 'bilaterally and multilaterally, in order to preserve the interests of our two people,' Zarif said. 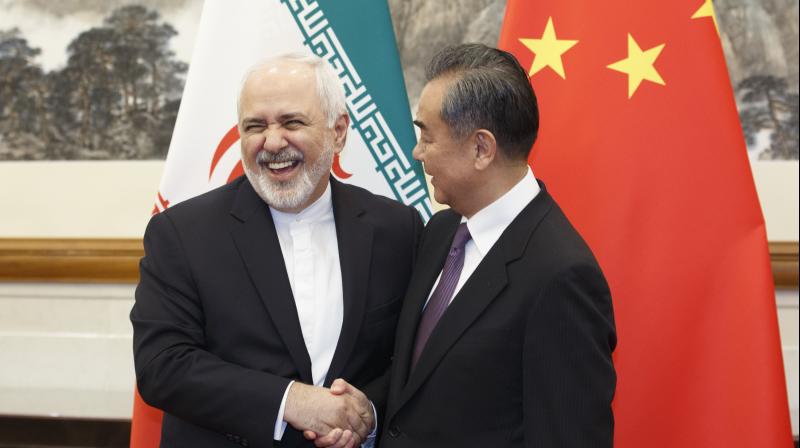 Wang told Zarif during the meeting that China hopes the Iran nuclear deal can be 'fully implemented.' (Photo:AP)

Beijing: Iran’s foreign minister praised his country’s relations with China during talks with his Chinese counterpart in Beijing amid heightened tensions and efforts by Tehran to keep its world markets open following the US withdrawal from the Iran nuclear deal.

Mohammad Javad Zarif met Friday with Wang Yi, whose country has been a major customer for Iranian oil, at the Diaoyutai state guesthouse.

“We consider (China) one of our closest partners in the world,” Zarif said in opening remarks at the start of the meeting.

Iran wishes to cooperate with China “bilaterally and multilaterally, in order to preserve the interests of our two peoples … for peace and security,” Zarif said.

Wang told Zarif during the meeting that China hopes the Iran nuclear deal can be “fully implemented.”

Along with ratcheting-up pressure on the Islamic Republic, Washington is engaged in an increasingly bitter tariff battle with China.

Wang’s comments were inaudible, but China has accused the US of raising tensions in the Middle East with its more assertive approach to Iran, as well as upsetting energy markets and the global economy.

The talks came after Saudi Arabia accused Iran of being behind a drone attack that shut down a key oil pipeline in the kingdom. A local newspaper linked to the Al Saud royal family called Thursday for America to launch “surgical strikes” on Tehran.

The US has also dispatched warships and bombers to the region to counter an alleged threat from Iran that has seen America order nonessential diplomatic staff out of Iraq.

President Donald Trump decided last year to withdraw the US from the 2015 nuclear accord between Iran and world powers and imposed wide-reaching sanctions that have crippled Iran’s economy.

Zarif arrived following a visit to Japan like China, a major importer of crude oil from the Persian Gulf as part of intense diplomatic efforts to salvage Tehran’s nuclear deal with world powers at the center of a crisis unfolding between Iran and the US

Zarif was quoted by Iran’s official IRNA news agency as chastising the international community, saying in Beijing that it has “mainly made statements, instead of saving the deal.”

After Trump pulled America out of the deal, other signatories the European Union, France, Britain, China, Russia and Germany have been trying to salvage it.