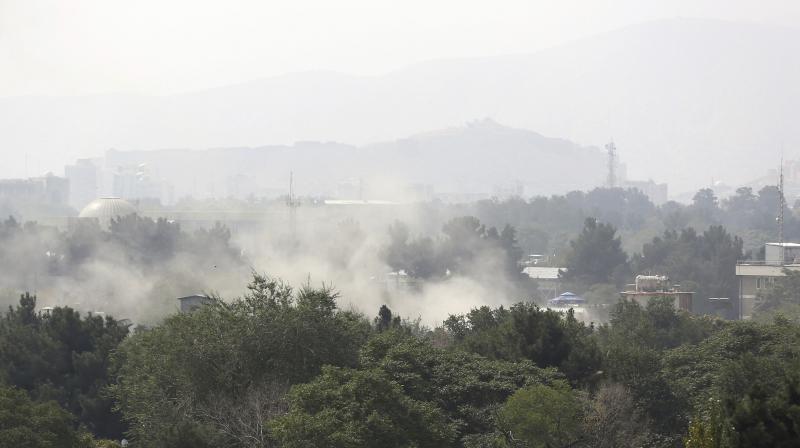 Smoke rises from a rocket attack during Independence Day celebrations at the Defense Ministry in Kabul, Afghanistan. — AP photo

Kabul:Several mortar shells slammed into various part of Kabul on Tuesday morning as Afghans marked their country's Independence Day amid new uncertainties over the start of talks between the Taliban and the Kabul government.

No militant group claimed responsibility for the attack and there were no immediate reports of injuries or damage.

The Interior Ministry's spokesman, Tariq Arian, said the mortars were fired from two vehicles in the northern and eastern part of the Afghan capital.

According to eyewitnesses, who spoke on condition of anonymity fearing reprisals, at least one mortar shell landed in the upscale Wazir Akbar Khan neighbourhood, where diplomats and senior government officials reside.

The attack came a day after the government said it would not release the last 320 Taliban prisoners it holds until the insurgents free more captured Afghan soldiers.

The decision went against that of a traditional Afghan council held earlier this month  the Loya Jirga  and is likely to further delay intra-Afghan peace talks sought by the United States.

Taliban spokesman Zabihullah Mujahid said he wasn't aware of the mortar attack in Kabul. The Islamic State group's affiliate, which operates in Afghanistan, has interrupted national celebrations in the past with rocket fire.

Also on Tuesday morning, Afghan President Ashraf Ghani attended an Independence Day ceremony at the Defence Ministry in Kabul, inspecting an honour guard and laying flowers on the Independence Minaret monument there.