Pakistan’s National Assembly has passed an unanimous resolution to condemn the “barbaric and cold-blooded murder”. 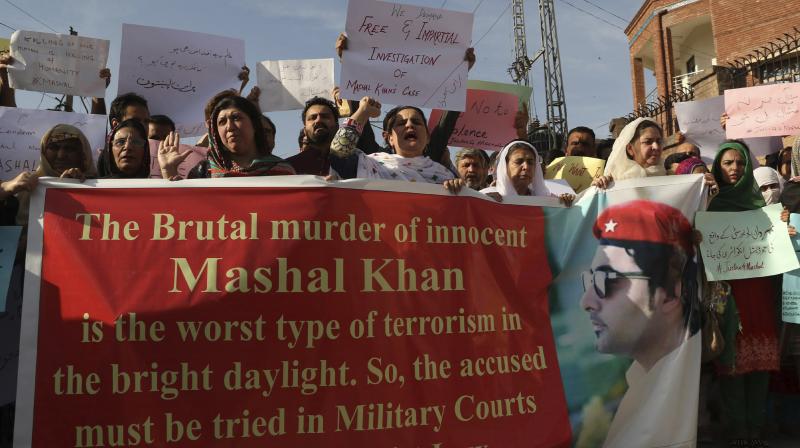 Activists of a Pakistani civil society protest against the killing of a student Mohammad Mashal in Peshawar, Pakistan, Friday, April. 14, 2017. Police said that a group of students at the Abdul Wali Khan University in the northwestern city of Mardan attacked and killed Mashal, accusing him of sharing blasphemous content on Facebook. Blasphemy against Islam is punishable by death under Pakistani law, and the mere suspicion of blasphemy is enough to ignite deadly mob violence in the Muslim-majority country. (Photo: AP)

Islamabad: Awami National Party leader Asfandyar Wali Khan has said that if his son was involved in the lynching of university student Mashal Khan, he should be hanged.

Addressing a rally in Nowshera, he said, “No culprit, no matter who he is, should be spared from punishment. Even if my son is involved in Mashal Khan’s murder, he must be hanged.”

Mashal Khan, a student of Journalism and Mass Communication at the Abdul Wali Khan Univeristy, Mardan, was shot in the head and beaten to death by a mob of fellow students on April 13 in the varsity’s premises.

“To kill a human in the name of Islam is not  justice,” he said, and thanked the Chief Justice of Pakistan for taking suo moto action on the matter.

Meanwhile, Pakistan’s National Assembly has passed an unanimous resolution to condemn the “barbaric and cold-blooded murder”.

Pakistan’s Senate has sought changes in the blasphemy laws to avert its misuse. Dawn reported that the Senators called for amending the law to punish those who concoct blasphemy accusations against others and demanded a campaign against those taking the law into their own hands.