The trend was supported by Pakistani citizens, amongst whom was a prominent Pakistani actor, Hamza Ali Abbasi. 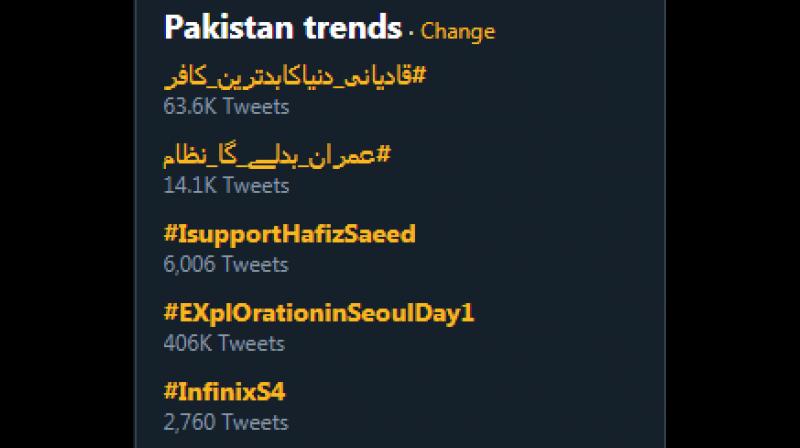 He was sent to seven-day judicial custody on July 17 after being arrested on charges of terror financing by Pakistan. (Photo: Twitter screengrab)

The trend was supported by Pakistani citizens, amongst whom was a prominent Pakistani actor, Hamza Ali Abbasi.

This will upset sum ppl but i must say wht i see as truth! I have know this man for yrs, i am quite familiar with their literature & the mindset of his followers.... HAFIZ SAEED IS NOT A TERRORIST! His only fault? He speaks for & rallies the youth for Kashmir! #IsupportHafizSaeed pic.twitter.com/IBBH7lY9kf

Pakistan was achieved in the name of islam this is the piece of land for which we are ready to render sacrifice of any sort.#IsupportHafizSaeed pic.twitter.com/GZ2o3bzxir

We stand with Hafiz Saeed ... We are All Hafiz Saeed#ISupportHafizSaeed#شيراسلام#AbubakarJutt293 pic.twitter.com/wazs2YiK88

All the weaknesses end turmoil is being exploited by anti-Islam forces#IsupportHafizSaeed pic.twitter.com/2wy0w3C6bR

A UN-proscribed terrorist, Saeed is the main accused in the 2008 Mumbai terror attacks, which killed around 165 people, including foreign citizens. His group, Lashkar-e-Taiba, is also accused of carrying out the 2001 Indian Parliament attack.

He was sent to seven-day judicial custody on July 17 after being arrested on charges of terror financing by Pakistan.

Many are seeing Hafiz's arrest as an attempt by Pakistan to circumvent blacklisting by the Paris-based anti-money laundering watchdog Financial Action Task Force (FATF). Pakistan has repeatedly failed to meet its commitments under the FATF action plan and is already on the body's "grey list."

Others have also speculated that the arrest is a bid by Pakistan to improve relations with the United States of America before Prime Minister Imran Khan's visit to Washington, during which he is slated to have a brief meeting with US President Donald Trump. Both India and the US have long sought for justice to be delivered to the victims of the 26/11 attacks.

Meanwhile, India has dismissed Hafiz's arrest as mere "drama," pointing out that it isn't the first time the UN-proscribed terrorist has been arrested.

"This has not been the first time that Hafiz Saeed has been arrested or detained. This drama has taken place at least eight times since 2001," said Ministry of External Affairs (MEA) spokesperson Raveesh Kumar.

"The question is whether this time it would be more than a cosmetic exercise and whether Saeed will be tried and sentenced for his terrorist activities," he added.

"We hope that this time Hafiz Saeed will genuinely be brought to justice," Kumar said.