11 weeks of demonstrations have seen millions of people take to Hong Kong's streets in the biggest challenge to China's rule. 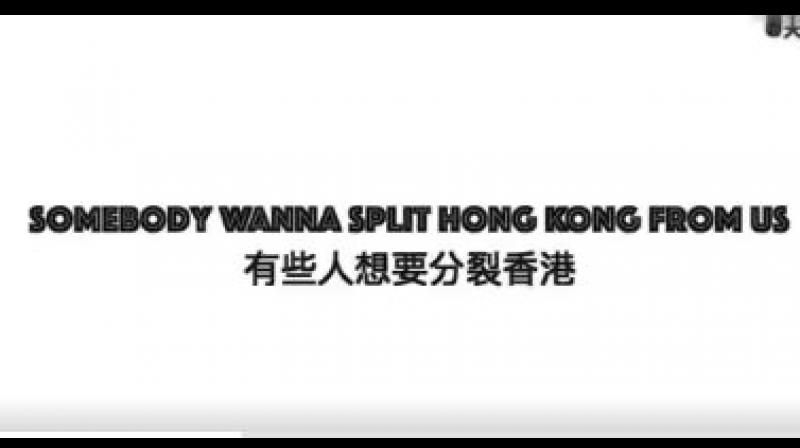 A screengrab from the rap video being shared by Chinese media. (Photo: Twitter | @PDChina)

Beijing: "Get those foreign agents outta town", roars a music video by a patriotic Chinese rap group, one of a slew of creative efforts by Beijing attacking Hong Kong's pro-democracy movement as violent and spurred on by overseas governments.

The rap video, overlaid with clips of protesters clashing with police and breaking into Hong Kong's legislative offices, is being shared by Chinese state media on its overseas and domestic social media accounts.

"Hey democracy! Once I heard you be found in the Middle East, people were throwing bombs across the city streets," runs the English-language rap by nationalistic Chinese group CD Rev.

"If that's what you want sorry I can't agree, get those foreign agents outta town then we can talk about it."

Eleven weeks of demonstrations have seen millions of people take to Hong Kong's streets in the biggest challenge to China's rule of the semi-autonomous city since its 1997 handover from Britain.

Hundreds of thousands of anti-government protesters joined a mass rally in Hong Kong on Sunday, filling major thoroughfares in heavy rain in the eleventh week of what have been often violent demonstrations in the Asian financial hub.

In turn, Beijing has intensified its rhetoric -- decrying the "terrorist-like" actions of a violent hardcore minority among protesters -- while accusing Western governments of inciting the pro-democracy rallies.

The CD Rev song also features a soundbite of US President Donald Trump saying "Hong Kong is a part of China".

Another video, which was shared by CCTV and China Daily, warned against the financial hub becoming a "paradise for violence".

It is not the first time Beijing has used the arts or the popularity of rap music as a vehicle for propaganda.

And CD Rev previously worked with the Communist Youth League to release "This is China" -- a party-approved song bursting with national pride.

But state media upped the ante over the weekend with a poem that compared demonstrators to Nazis.

On Saturday, state broadcaster CCTV tweeted a post that was written in the style of a well-known poem by Martin Niemoller, an outspoken critic of Hitler.

"First they hurled bricks and iron barriers... and I did not speak out, because they were young and should be forgiven", read the online flyer that was titled: "Hong Kongers are you going to remain silent?".

"And then they came and attacked me, and there was no one left to speak for me and protect me."

Such brazen messaging may not yield the results desired by Beijing, however.

Beijing's propaganda campaign has been "relatively successful in persuading Western media that public opinion in mainland China is massively hostile to Hong Kong", said Sebastian Veg, a contemporary Chinese history and politics professor at the School of Advanced Studies in Social Sciences in Paris.

But some of its propaganda is "bound to backfire", Veg told AFP, referring to CCTV's tweet.

"Such messaging will no doubt be seen as deeply repulsive [to] governments and public opinion in Europe and around the world and hardly endear them to Beijing's views," he said.