World   Asia  19 Aug 2019  How Singapore firms are being impacted by the stalled Amaravati project
World, Asia

How Singapore firms are being impacted by the stalled Amaravati project

In 2014, Hyderabad was hived off to become the state capital of the newly created state of Telangana. 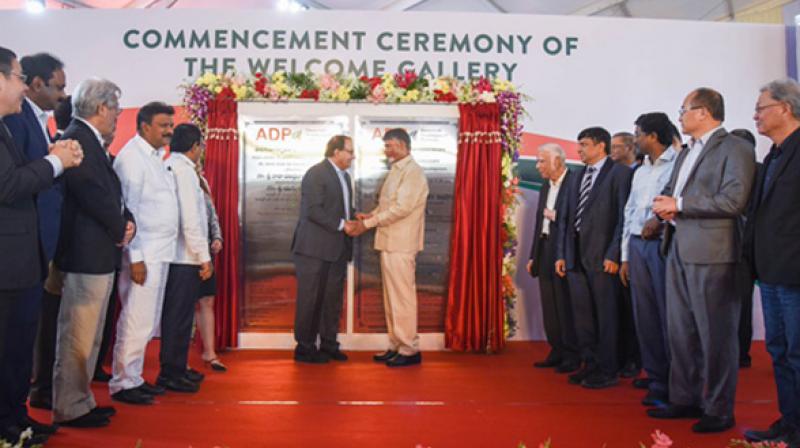 Singapore firms were involved in the development of Amaravati from 2014 with Singapore government-linked Surbana Jurong submitting the city's master plan in 2015. (Photo: ANI / File)

Singapore: Mere seven months after the groundbreaking ceremony of the Amaravati Welcome Gallery, it looks increasingly likely that the ostentatious state capital project could be scaled back dramatically.

On January 10 this year, then Chief Minister of Andhra Pradesh, Chandrababu Naidu, and Singapore Minister-in-charge of Trade Relations, S Iswaran, unveiled a commemorative plaque with much fanfare and aplomb to what was planned to be a showcase entrance to the envisaged 6.84 square kilometres waterfront financial centre of the new state capital of Amaravati.

Now it seems likely that only the bare necessities for an administrative capital will be constructed before 2024 when Hyderabad will officially cease to be the joint capital of Andhra Pradesh and the state of Telangana.

In 2014, Hyderabad was hived off to become the state capital of the newly created state of Telangana.

Singapore firms were involved in the development of Amaravati from 2014 with Singapore government-linked Surbana Jurong submitting the city's master plan in 2015.

A consortium formed by two other Singapore government-linked firms, Ascendas-Singbridge and Semcorp Development, were awarded contracts to be the master developers for the planned financial centre, which was to be developed together with their Indian partners Amaravati Development Corporation Ltd (ADCL).

Amaravati was built from scratch across agricultural land in the Guntur Vijayawada region. It was to be modelled after Singapore- filled with greenery, parks, flowing rivers and fresh air for its residents to enjoy.

It was meant to be like no other Indian city, free from chaos, traffic congestion and pollution.

The new state capital was the brainchild of Chandrababu Naidu, who wanted it to be among the best, most liveable and most admired cities in the world.

The plan was to have nine themed cities and 27 townships over an area of 217 square kilometres in a world-class development.

Besides Singapore, it had attracted investors from Australia, Japan, Germany and the United Kingdom.

However, the pace of the project seems to have slowed down. In the most recent budget, only USD 70 million was allocated to the state capital construction project. Instead, as promised in the new state government's election manifesto, the money will be channelled to other projects, which will improve social welfare, literacy and education as well as to upskill workers.

The new government, led by Chief Minister Jagan Mohan Reddy, alleged that their predecessors were involved in impropriety behaviour, including land scams, insider trading, and had bought land in the Amaravati region before the public announcement of the plan. This has been vehemently denied by former government officials.

Reddy has set-up a team to review these allegations as well as to review the other aspects of the project - both technical and financial and also its environmental impact. There have been claims that environmental and social issues related to its development were not looked into or addressed.

Just three weeks ago, the World Bank and the Asian Infrastructure Investment Bank, pulled funding for the project. A total of USD 500 million was committed to the project by these two financial institutions.

The World Bank, in a statement, said that the government withdrew its request for the financing of the proposed Amaravati Sustainable Infrastructure and Institutional Development project.

Overall investment in the state capital required to fulfil former Chief Minister Naidu's vision was estimated to be over USD 20 billion in three phases.

With a local budget allocation of just USD 70 million and another USD 210 million from the central government, completing the project on schedule seems challenging.

Surbana Jurong, Ascendas-Singbridge and Sembcorp Development are not the only Singapore companies involved in the Amaravati project. Through the "Sunrise Programme", over 1,200 companies supported by Enterprise Singapore were enticed to invest in the state.

Together, it was reported that Singapore companies have committed over USD 3 billion into projects related to the city with collaboration in such areas as urban planning and development, transportation, waste and water management, power, building and construction, public healthcare and public libraries.

Contracts worth over USD 5 billion have already been awarded. It is not known how many of these were given to Singapore companies.

There are concerns that air connections may also be affected over flight arrangements connecting Singapore's Changi Airport and Amaravati's Vijayawada Airport, which were signed by the previous state government.

It was reported that Singapore High Commissioner to India, Lim Thuan Kuan accompanied by officials from the Trade and Industry Ministry, went to meet the new chief minister few days ago.

It looks likely that Singapore and Singapore companies will have to come up with better ideas and other means to work with the current state government to ensure the money already invested in Amaravati is not lost.