Chinese President said China will never pursue development at the cost of others, nor will China ever give up its legitimate rights and interests. 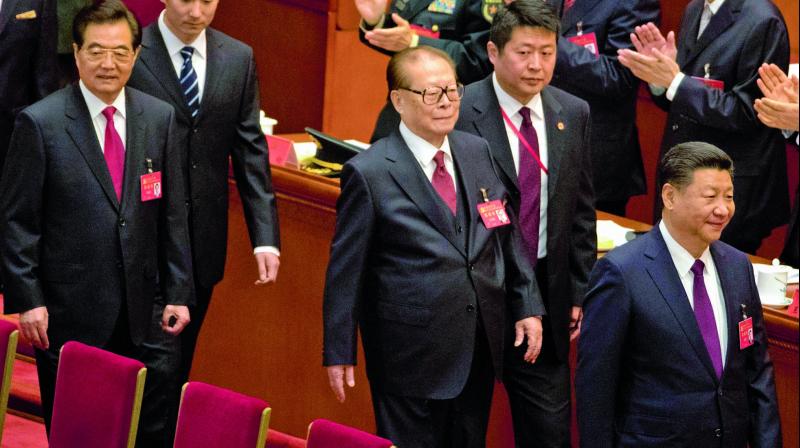 Beijing: Chinese President Xi Jinping on Wednesday assured his country’s jittery neighbours that Beijing was ready to resolve its disputes through dialogue but not at the expense of its strategic interests, as he opened a key meeting of the ruling Communist Party elite that will boost his grip on power with a second term and even an unprecedented third innings.

Mr Xi, general secretary of the Communist Party of China (CPC), called the progress China had made under his watch “truly remarkable”, but told the 2,000-plus delegates attending the 19th party congress that more needed to be done as the country moves towards a goal of “national rejuvenation”.

“Our party, our people, our forces, and our nation have changed in ways without precedent,” the 64-year-old top leader said from the Great Hall of the People adjoining Tiananmen Square in the heart of Beijing on the opening day of the week-long meeting.

He said China will never pursue development at the cost of others, nor will China ever give up its legitimate rights and interests. “No one should expect China to swallow anything that undermines its interests,” he said amid thumping applause from over 2,300 delegates who attended the meeting that was telecast live.

About neighbours, Mr Xi said China would “deepen relations its neighbours in accordance with the principles of amity, sincerity, mutual benefit and inclusiveness and the policy of forging friendship and partnership”.

“We should commit to settling disputes through dialogue and resolving differences through discussion, coordinate responses to traditional and non-traditional threats and oppose terrorism in all its forms,” Mr Xi said.

His comments assume significance in the backdrop of the recent military standoff between India and China in the Doklam area of the Sikkim sector. China is also now engaged in a number of maritime disputes with its neighbours in the South and East China Seas.

In his address, Mr Xi also vowed make the People’s Liberation Army (PLA) a world-class military during his over three-and-a-half-hour speech at the once-in-five-years congress which is set to confirm his second term and anoint a new generation of leaders to work with him. He spoke also highlighted the importance of rebuilding of the CPC while keeping its socialist structure intact.

At the opening session, the party put up a united show with most top retired leaders, including former Presidents Jiang Zemin and Hu Jintao, besides former Premiers Wen Jiabao and several other erstwhile leaders sharing the dais with Mr Xi. The meeting, amid tight security and Internet censorship, will also amend the party’s constitution.

Mr Xi spoke at length of strengthening the military, need for continuation of his massive anti-corruption drive and bringing a “new era of socialism” and Chinese rejuvenation. He spoke at length about his plans to make the 2.3- million-strong PLA, the world’s largest military, into a world-class force. By 2020, mechanisation will be basically achieved, with IT application coming a long way and strategic capabilities seeing a big improvement, he said.

The modernisation of the national defence and armed forces should be basically completed by 2035, by which the “armed forces have been fully transformed into world-class military forces”, he said.

The Chinese military, which underwent massive reforms since Mr Xi took over power in 2012, has a $141 billion annual budget, next only to the US military. Unlike the militaries elsewhere, the Chinese military works directly under the leadership of the party. Mr Xi is the chairman of the powerful Central Military Commission, the overall high command of the PLA.

Mr Xi also devoted his address to strengthening of the CPC, which has ruled the country since 1949. “We must unwaveringly uphold and improve party leadership and make the party still stronger,” he said.

Mr Xi, who in the past has warned the party of going the way the Soviet Communist Party collapsed in 1991, said the defining feature of the party is socialism with Chinese characteristics.

Founded in 1921, the CPC has about 89 million members with more than 4.5 million grassroots organisations. Last year, Mr Xi was endorsed as the core leader, a status bestowed on party founder Mao Zedong and successor Deng Xiaoping.

By heading the party, presidency and the military, Mr Xi has emerged as the most powerful leader in the country. His ideological teachings are expected to be made part of the amended CPC constitution during the congress to ensure his legacy. Only the names of Mao and Deng were part of the CPC constitution.

Observers say with consolidation of power and having bulldozed the remnants of opposition within the party through his massive anti-corruption drive, Mr Xi may be declared as chairman of the CPC and may even have an unprecedented, third term after 2022. All Chinese leaders retire at the age of 68.

The CPC will prevent any interest groups from arising within the party, Mr Xi said, adding wherever offenders may flee, they shall be brought back and brought to justice. Since he took over power, over 280 centrally-administered officials were investigated and over 1.4 million officials were punished, the state-run Xinhua news agency has reported.