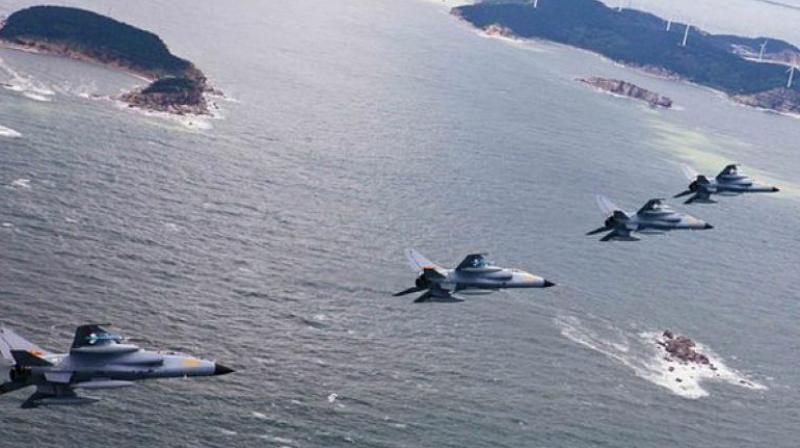 China says its military facilities in the Spratlys are purely defensive, and that it can do what it likes on its own territory. (Photo: Representational Image/AFP)

Shanghai: China's air force has landed bombers on islands and reefs in the South China Sea as part of a training exercise in the disputed region, it said in a statement.

"A division of the People's Liberation Army Air Force (PLAAF) recently organized multiple bombers such as the H-6K to conduct take-off and landing training on islands and reefs in the South China Sea in order to improve our ability to 'reach all territory, conduct strikes at any time and strike in all directions'," it said in the statement issued on Friday.

It said the pilot of the H-6K bomber conducted assault training on a designated sea target and then carried out take-offs and landings at an airport in the area, describing the exercise as preparation for "the West Pacific and the battle for the South China Sea".

The notice, published on the PLAAF's Weibo microblogging account, did not provide the precise location of the exercise.

The United States has dispatched warships to disputed areas of the South China Sea in a bid to challenge China's extensive sovereignty claims in the territory, which is subject to various claims by China, Vietnam, the Philippines, Taiwan, Brunei and Malaysia.

"We have seen these same reports and China's continued militarization of disputed features in the South China Sea only serves to raise tensions and destabilize the region."

Philippine opposition lawmakers condemned China's militarization of the South China Sea and what they said was the inaction of their own government.

Senator Risa Hontiveros sought an end to Manila's "subservience" to China, while Congressman Gary Alejano said the issue of China's militarization in the South China Sea is a "global concern".

"By placing our country within striking distance of its nuclear-capable bombers, China has virtually threatened us with nuclear war over the West Philippine Sea," Hontiveros said in a statement, using the local name for the South China Sea.

"With the silence and subservience of the Philippine government to China, we are placing in grave danger not only our country but also our neighbouring nations," Alejano said in a statement.

China says its military facilities in the Spratlys are purely defensive, and that it can do what it likes on its own territory.

Philippine President Rodrigo Duterte defended his position not to confront China and reiterated his openness to undertake joint exploration and development in waters believed to be rich in oil and natural gas.

It was not clear if he was aware of the news about China's bombers landing on islands and reefs in the South China Sea.

"And with their hypersonic, they can reach Manila within 7 to 10 minutes. If we will go to a full-blown war, where would the Philippines end up?" Duterte said.