China permitted all couples to have two children in 2016, scrapping the draconian decades-old one-child policy 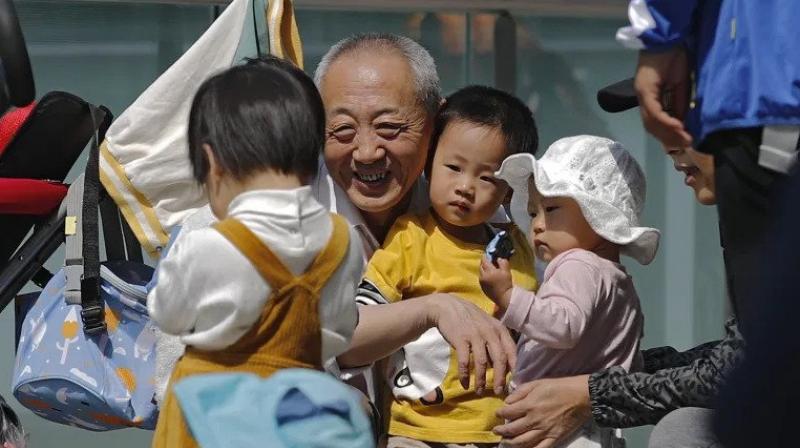 In May this year, the ruling Communist Party of China approved a relaxation of its strict two-child policy to allow all couples to have up to three children. (Representational image: AP)

Beijing: China's national legislature on Friday formally endorsed the three-child policy mooted by the ruling Communist Party, in a major policy shift aimed to prevent a steep decline in birth rates in the world's most populous country.

The revised Population and Family Planning Law, which allows Chinese couples to have three children, was passed by the Standing Committee of the National People's Congress (NPC).

In an apparent attempt to address the reluctance of the Chinese couples to have more children due to mounting costs, the amended law has also passed more social and economic support measures to address the concerns.

The new law stipulates that the country will take supportive measures, including those in finances, taxes, insurance, education, housing and employment, to reduce families' burdens as well as the cost of raising and educating children, state-run China Daily reported.

The NPC has revised the law to implement the central leadership's decision to cope with new circumstances in social and economic development and promote balanced long-term population growth, the report said.

In May this year, the ruling Communist Party of China (CPC) approved a relaxation of its strict two-child policy to allow all couples to have up to three children.

China permitted all couples to have two children in 2016, scrapping the draconian decades-old one-child policy which policymakers blame for the demographic crisis in the country.

Chinese officials claim the one-child policy implemented for over three decades has prevented over 400 million births.

The decision to permit the third child came after this month's once-in-a-decade census showed that China's population grew at the slowest pace to 1.412 billion amid official projections that the decline may begin as early as next year.

The new census figures revealed that the demographic crisis China faced was expected to deepen as the population of people above 60 years grew to 264 million, up by 18.7 per cent last year.

As the calls for the government to do away with the family planning restrictions grew louder due to the concerns that the declining population in the country could result in serious labour shortages and negatively impact the world's second-largest economy, the CPC decided to permit a third child while declining to completely scrap the family planning policy.

"Data shows the ageing of the Chinese population has further deepened, and we will continue to face the pressure to achieve a long-term balanced population development," Ning Jizhe, head of the National Bureau of Statistics (NBS), said while releasing the census figures on May 11.

The two-child policy failed to enthuse couples to have a second child as fewer opted for the second child, citing heavy expenditure in raising the children. The poor response made Liang Jianzhang, professor at Peking University's School of Economics, to suggest the government offer parents one million yuan (USD 156,000) for each newborn child to shore up the country's declining birth rate.

Dan Wang, the chief economist at Hang Seng Bank (China), said the three-child policy would have a positive impact on Chinas birth rate, but not as much as the authorities hoped for.

The high costs of housing and education, as well as a lack of job protection for women, are strong economic constraints on having children, she said, adding that the cost of having a third child would be too high for most middle-class families.

The declining trend prompted Chinese demographers to predict that India's population may overtake China's earlier than the UN projection of 2027 to take the top spot as the most populous country in the world.

Projected to surpass China as the world's most populous country around 2027, India is expected to add nearly 273 million people between now and 2050 and will remain the most populated country through the end of the current century, a UN report said in 2019.

The UN report stated that in 2019, India had an estimated population of 1.37 billion and China 1.43 billion and by 2027 India's population is projected to surpass China's.

Lu Jiehua, professor of sociology at Peking University, said that China's population may peak by 2027 before it starts to decline. Some demographers believe the peak may come as soon as 2022.

China is also facing the risk of falling into the trap of low fertility, as it recorded 12 million births in 2020, marking a drop for the fourth consecutive year.

A report this year by China's central bank - the People's Bank of China (PBOC) - said demographics of China is set to change as its population growth enters negative growth after 2025, which will result in a shortage of consumer demand. "When the total population enters negative growth [after 2025], there will be a shortage of demand. We need to pay attention to the impact of demographics on future consumption," said Cai Fang, a member of the monetary policy committee of the PBOC.

The PBOC study said China should immediately liberalise its birth policies or face a scenario in which it has a lower share of workers and a higher burden of elderly care than the US by 2050.

It said the country should not interfere with people's ability to have children or it will be too late to reverse the economic impact of a declining population.

China is also eyeing a progressive, flexible and differentiated path to raising the retirement age.