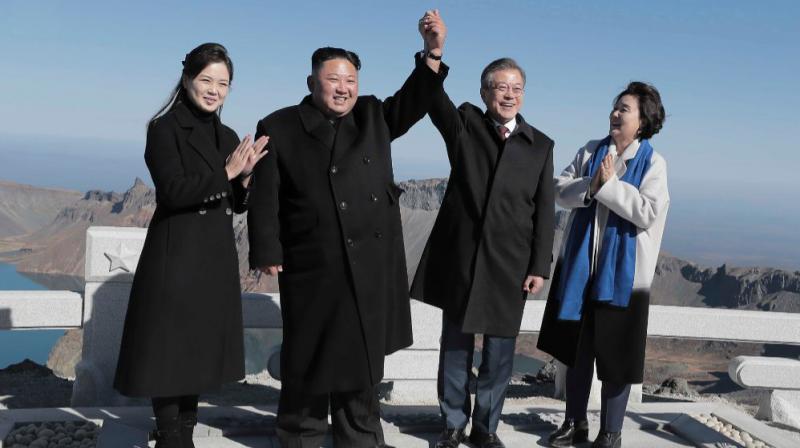 Seoul: Kim Jong Un and Moon Jae-in visited the spiritual birthplace of the Korean nation Thursday for a show of unity after their North-South summit gave new momentum to Pyongyang's negotiations with Washington.

The North Korean leader on Wednesday agreed to shutter the Tongchang-ri missile-testing site in the presence of international observers, a move the US welcomed by saying it was ready for immediate talks aimed at denuclearising the North.

Pyongyang also said it could dismantle its best-known nuclear facility at Yongbyon, if the US takes "corresponding measures", as Kim and the South Korean president held their third summit this year.

It is an important caveat, but the declaration appeared to break the logjam in nuclear discussions with Washington.

Secretary of State Mike Pompeo also praised the "important commitments", saying he spoke with his North Korean counterpart and invited him to meet next week on the sidelines of the United Nations General Assembly.

Washington was ready to "engage immediately in negotiations" to achieve the North's denuclearisation of North Korea by January 2021, he added -- the end of Trump's first term.

The process had stalled after the historic Singapore summit between Trump and Kim in June, when Kim declared his backing for denuclearisation of the peninsula but no details were agreed.

Washington and Pyongyang have subsequently sparred over what that means and how it will be achieved, with the Trump administration consistently referring to the denuclearisation of North Korea specifically.

For its part, Pyongyang has condemned demands for its unilateral disarmament as "gangster-like".

Experts remain sceptical about the Tongchang-ri pledge, pointing out that Pyongyang has used several other locations for missile launches, repeatedly said it has no need for further testing, and closing the site would have no impact on its ability to manufacture rockets.

Many also believe that apart from Yongbyon, the North also has covert nuclear facilities.

Their main purpose, he added, was "to appease Trump, so that Moon and Kim can keep their engagement alive".

"This is what an Israel-style deal looks like with North Korea: They pretend to disarm and we pretend to believe it."

Moon and Kim have sought to strengthen the North-South relationship at their Pyongyang summit, agreeing that the North Korean leader will visit Seoul "at an early date".

It would be the first such trip by a North Korean leader since the Korean War ended in a 1953 armistice, leaving the peninsula divided by the Demilitarized Zone and technically still in a state of war, and Moon said the historic journey could happen later this year.

The two leaders also agreed to a open permanent facility for family reunions, work towards joining up road and rail links, and bid jointly for the 2032 Olympics.

At a performance of the North's spectacular "Mass Games" propaganda display, Moon made an unprecedented address by a South Korean leader to a Northern crowd, telling them that Koreans had lived together for 5,000 years.

"I propose we move forward toward the big picture of peace in which the past 70-year-long hostility can be eradicated and we can become one again," he said, prompting rapturous applause.

On Thursday, Moon and Kim, accompanied by their wives, visited Mount Paektu on the Chinese border, Seoul said.

The 2,744-metre (9,003-foot) peak is considered sacred to all Koreans as the birthplace of Dangun, the legendary founder of the first Korean kingdom.

According to Pyongyang's narrative, it is also where Kim Jong Un's father Kim Jong Il was born, at a secret camp where his own father Kim Il Sung, the North's founder, was fighting Korea's Japanese colonial occupiers.

But overseas historians say Kim Jong Il was born in the Soviet Union, where his father was in exile.

South Korean tourists flock to see the mountain via China but only a handful of Southerners have been granted access from the North Korean side, mostly for research purposes.

After the excursion, Moon will fly directly back to Seoul, his spokesman said, ending his three-day visit to the North.