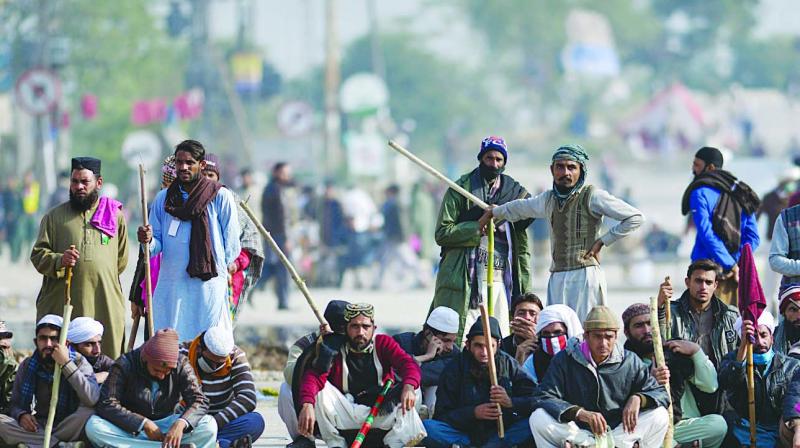 Activists from a hardline religious group block a street during a protest in Islamabad. (Photo: AFP)

Islamabad: Pakistan interior minister Ahsan Iqbal said on Sunday that no government can ever compromise on the Khatm-e-Nabuwat (finality of the prophethood) and the parliament had always upheld it.

Some media reports on Sunday suggested that if government’s negotiations with sit-in protesters failed, there could be violent actions against protesters and fears were that it might flare up the way it did during the Lal Masjid episode way back in 2007.

Speaking to reporters here, Mr Iqbal urged the religious group protesters to end their sit-in as the sacred issue was being abused for political purposes. “People want to make this issue a political launch-pad. But paving way for violence through such protest is unacceptable,” he said.

The minister said Prophet Mohammed’s teachings called for a tolerant society but Tehrik -e-Labbaik’s sit-in protest was contrary to that. “The Prophet’s teachings are of tolerance instead of calling names to others from a stage. This is not consistent with Islam’s teachings,” he added.

He asked the protesters “why they were trying to create an atmosphere of chaos during the upcoming holy month of Rabiul Awwal.”

The interior minister said that the deadlock remains because the protesters are demanding the law minister’s resignation. However, they also agree that no one can be accused of such a crime when there has been no thorough investigation.

“How can we remove the law minister? If we start doing this, every other day, people will make similar demands,” he said.