Ministry of interior spokesman Najib Danish confirmed that several attackers had entered the hotel and one has been killed. 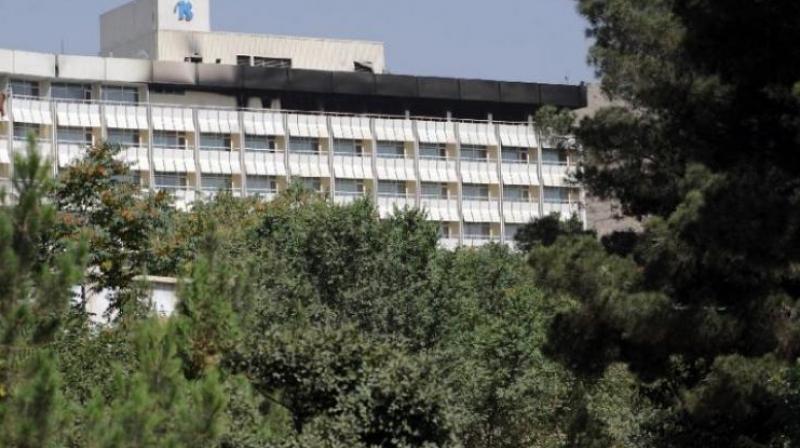 Kabul: At least four gunmen attacked Kabul's landmark Intercontinental Hotel on Saturday and started shooting at guests, officials said, in an assault that is still under way.

There was no immediate claim of responsibility for the latest attack in the Afghan capital that followed a series of security warnings in recent days to avoid hotels and other locations frequented by foreigners.

"Four attackers are inside the building," an official at the National Directorate of Security (NDS) spy agency told AFP.

They are "shooting at guests", he said.

A guest hiding in a room told AFP he could hear gunfire inside the state-owned 1960s hotel."I don't know if the attackers are inside the hotel but I can hear gunfire from somewhere near the first floor," he said by telephone without giving his name.

"We are hiding in our rooms. I beg the security forces to rescue us as soon as possible before they reach and kill us."

His phone was switched off when AFP tried to contact him again.

Another official said the attackers were armed with small weapons and rocket-propelled grenades when they blasted their way into the hotel, which often hosts weddings, conferences and political gatherings.

"They are now on the third and fourth floors fighting with our forces. We don't know the details of casualties yet but they set the kitchen on fire," interior ministry spokesman Nasrat Rahimi told AFP.

"Firefighters are also there to put out the fire."

The fourth floor of the hotel, which has four restaurants and a swimming pool, is also on fire, the NDS official said.

Ministry of interior spokesman Najib Danish confirmed that several attackers had entered the hotel and one has been killed.

"We don't know the details yet but our forces are in the area to bring them down," Danish said.

There was no immediate information on casualties.

Some of the occupants inside the hotel are hiding on the second floor, a security source said. Electricity was cut after an initial explosion at the hilltop hotel, a counterterrorism source said.

A conference on Afghanistan-China relations was held at the hotel earlier Saturday, attended by the Chinese embassy's political counsellor Zhang Zhixin.

The Intercontinental was last targeted in June 2011 when a suicide attack claimed by the Taliban killed 21 people, including 10 civilians.

Security in Kabul has been tightened since May 31 when a massive truck bomb ripped through the diplomatic quarter, killing some 150 people and wounding around 400 others -- mostly civilians. No group has yet claimed that attack.

The Islamic State group has claimed most of the recent attacks in the Afghan capital, but authorities suspect that the Taliban-affiliated Haqqani Network has been involved in some of the assaults.

The deadliest of the recent attacks happened at a Shiite cultural centre on December 29 when a suicide bomber blew himself up, killing more than 40 people.