Three explosions were reported from the five-star hotels - the Shangri-La, the Cinnamon Grand and the Kingsbury. 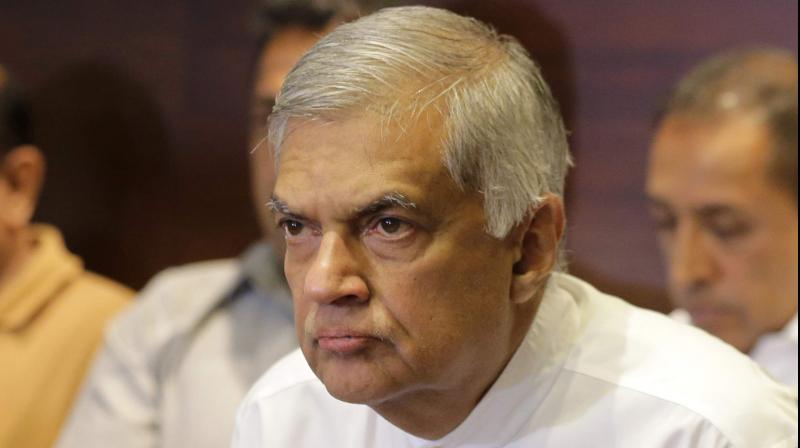 Prime Minister Ranil Wickremesinghe while condemning the attacks called upon all the Sri Lankans to remain united and said the government is taking immediate steps to contain the situation. (Photo | AP)

Colombo: Sri Lankan president, prime minister and other political leaders strongly condemned a series of coordinated bomb attacks on churches and hotels on Sunday that left over 150 dead and urged people to be patient while vowing to bring to justice those responsible for the barbaric act.

The blasts targeted St Anthony's Church in Colombo, St Sebastian's Church in the western coastal town of Negombo and another church in the eastern town of Batticaloa around 8.45 a.m. (local time) as the Easter Sunday mass were in progress. Three explosions were reported from the five-star hotels - the Shangri-La, the Cinnamon Grand and the Kingsbury. Foreigners and locals who were injured in hotel blasts were admitted to the Colombo General Hospital.

Sri Lankan President Maithripala Sirisena expressed shock, deep pain and dismay over the brutal attacks on places of religious worship and other civilian establishments. The President said he has instructed all law enforcement agencies and defence services to take every possible step to maintain law and order and conduct speedy investigations into the dastardly attack and bring the culprits and those who were behind this conspiracy to book. "I have given instructions to take very stern action against the persons who are responsible for this conspiracy," the President said and added that all required steps have been taken to fulfill the responsibilities as a government.

Sirisena appealed to the nation to act with utmost restraint and patience, and not to be misled by baseless rumours and false stories. He also urged the people to extend unstinted support and cooperation to the government for the steps taken at this trying occasion.

At least 140 people, including nine foreigners, were killed and over 400 were injured as the Christians in the country celebrated the Easter.