Panjshir Valley last bastion to hold out against Taliban

Surrounded by the high peaks of the Hindu Kush north of Kabul, the Panjshir has long had a reputation as a bastion of resistance 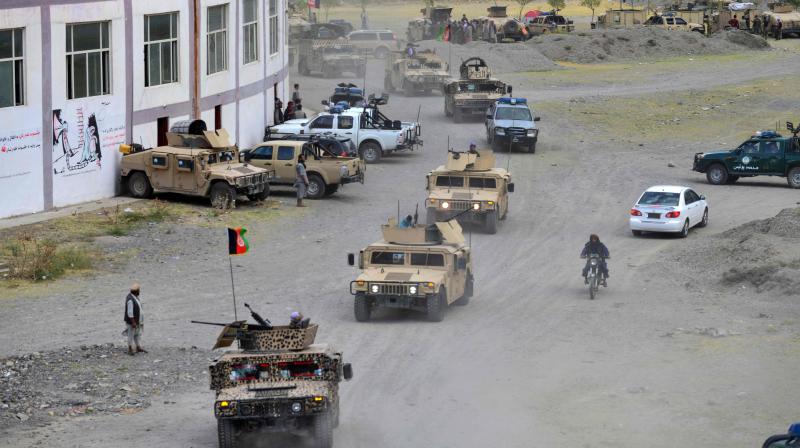 Afghan security forces on Humvee vehicles move in a convoy at Parakh area in Bazarak, Panjshir province on August 19, 2021, after the Taliban stunning takeover of Afghanistan. (Photo: AFP)

Paris: The Panjshir Valley north of Afghanistan’s capital Kabul is the final major centre of resistance to the Taliban, but analysts say the fighters gathered there will struggle if the Islamist hardliners launch a full-scale attack.

Surrounded by the high peaks of the Hindu Kush north of Kabul, the Panjshir has long had a reputation as a bastion of resistance — legendary military commander Ahmad Shah Massoud successfully defended it during the Soviet-Afghan War and the civil war with the Taliban up to his death in 2001.
Right now, it is the only part of the country confirmed to be beyond Taliban control after a lightning offensive saw the rest of the country quickly capitulate.

Amrullah Saleh, latterly the country’s vice president and a key powerbroker under the Western-backed governments of the last two decades, and Ahmad Massoud, the son of Ahmad Shah Massoud, have both taken refuge in the area and called for an uprising against the Taliban.

“I write from the Panjshir Valley today, ready to follow in my father's footsteps, with mujahideen fighters who are prepared to once again take on the Taliban,” Ahmad Massoud wrote in the Washington Post, calling on the United States to arm his forces.

Saleh, who formerly headed Afghanistan's intelligence service that worked closely with the West, said: “I will never be under one ceiling with the Taliban.”

But analysts doubt Panjshir can become a serious threat to the Taliban. “The resistance for the moment is just verbal because the Taliban have not yet tried to enter the Panjshir,” said Afghan specialist Gilles Dorronsoro from Sorbonne University in Paris.

“The Taliban only need to lock down the Panjshir, they don't even have to go in there.”Abdul Sayed, an independent researcher based in Lund in Sweden, said he did not share Massoud's optimism for the chances of resistance.
“The Taliban surround Panjshir from all sides and I don't think Massoud's son can resist much more than a couple of months. For the moment, he does not have any really strong support,” said Sayed.