Duterte killings in 1980s were part of police ops: Philippines

Duterte recounted how in 1988, he and local police ambushed and killed three suspected kidnappers. 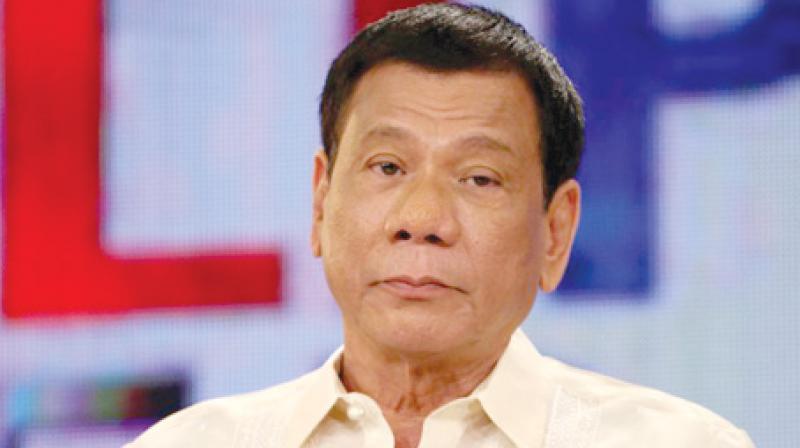 Duterte has said he routinely carried a gun during his early years as mayor of Davao to protect himself in a high-crime environment.

Manila: The Philippines said Wednesday that President Rodrigo Duterte's killing of three people in the 1980s was part of a police operation, after the United Nations rights chief urged Manila to investigate him for murder.

In several speeches last week, Duterte recounted how in 1988, early in the first of his several terms as mayor of the southern city of Davao, he and local police ambushed and killed three suspected kidnappers.

"Again, let me just remind one and all, that the incident referred to by the president was actually covered by media and it was (a) legitimate police action," Abella added.

He did not address Duterte's possession and discharge of a firearm while not a policeman.

Duterte has said he routinely carried a gun during his early years as mayor of Davao to protect himself in a high-crime environment. He has not said if the weapon used in the ambush was licensed.

He won the presidential election by a landslide in May largely on a vow to kill 100,000 criminals to stop the country's slide into a "narco-state".

According to the UN, nearly 6,100 people have been killed  since Duterte took office in late June.

Philippine police put the figure at about 5,300 violent deaths, with Duterte consistently rejecting allegations his incendiary comments could be encouraging police to commit murder.

While mayor of Davao, Duterte was investigated by the independent Commission on Human Rights over allegations he ran death squads that killed more than a thousand petty criminals in the city.

Duterte has variously denied or confirmed the allegations. The commission did not file any criminal charges after completing its inquiry.

Zeid called for "credible and independent investigations" to be immediately reopened into the Davao killings.

And he demanded similar probes into the "shocking number of killings that have occurred across the country since Mr. Duterte became president".

"The perpetrators must be brought to justice, sending a strong message that violence, killings and human rights violations will not be tolerated by the State and that no one is above the law," Zeid said.